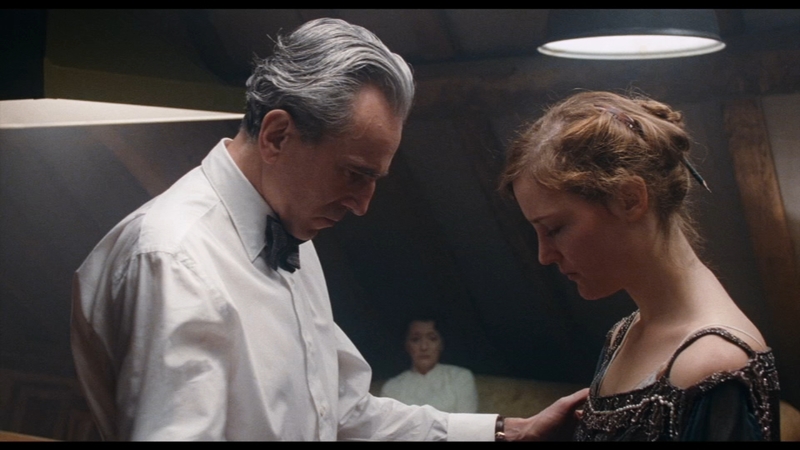 NEW YORK (WABC) -- A fashion designer and his muse search for the "Phantom Thread" as they battle each other to a draw in a passive aggressive way, but this seems more like an intellectual exercise than a film about real people. It does feature another terrific performance by Daniel Day Lewis who announced his retirement after this one.

In the rush to praise "Phantom Thread," the picture, set in the fashion world of the 1950's, has been called "true to life;" but it rang false to me; and the fact this could be the last movie starring Daniel Day Lewis is just downright sad!

The actor prepared with his customary diligence: spending a year as an intern in a New York City costume shop learning how to measure and sew, yet I never fully bought the star as a fashion designer. I vastly preferred a series set in the same era called "The Collection" that streamed earlier this year.

His muse and lover, Alma, must contend with Reynolds Woodcock and his sister, Cyril, who is also his business partner. Alma, who meets the designer when she serves him in a small, provincial restaurant, must endure so much disrespect from both of them that he hardly seems worth it. "Reynolds has made my dreams come true," she explains, "and I have given him what he desires most in return: every piece of me."

I am one of those who will give true artists the benefit of the doubt as human beings, overlook a few personal flaws, if greatness is the result. And, the man who made "Phantom Thread," Paul Thomas Anderson, is one of my favorite directors; but this time The Emperor has no clothes-- which is ironic given that clothing is the subject of his latest film.

This is one of those films that so many sophisticated people tell you is good, you might feel you have to like it too, but I'm telling you: "Phantom Thread" is the biggest disappointment of the year. It's beautiful on the surface, but empty at its core. As a hymn to the male ego, it's the wrong movie at the wrong time.
Report a correction or typo
Related topics:
arts & entertainmentmovie reviewsandy kenyon
Copyright © 2021 WABC-TV. All Rights Reserved.
TOP STORIES
Search on for thieves after restaurant workers' scooters stolen
Lifeguard may have been bitten by shark at Jones Beach
Uber driver, his passengers among 5 killed in Long Island crash
Eyewitness News evening update
Koreas agree to restore communication channels, improve ties
Cuomo tries to cast doubt on sexual harassment claims
Kitten saved from underside of car after highway rescue
Show More
Committee set for Jan. 6 hearings amid Republican attacks
New 'Destructive' Severe Thunderstorm Warning to trigger phone alerts
Be Kind: 8-year-old auctions hog to raise money for sick friend
Political drama over Jan. 6 investigation, infrastructure deal
2 men charged in luxury watch robbery spree
More TOP STORIES News