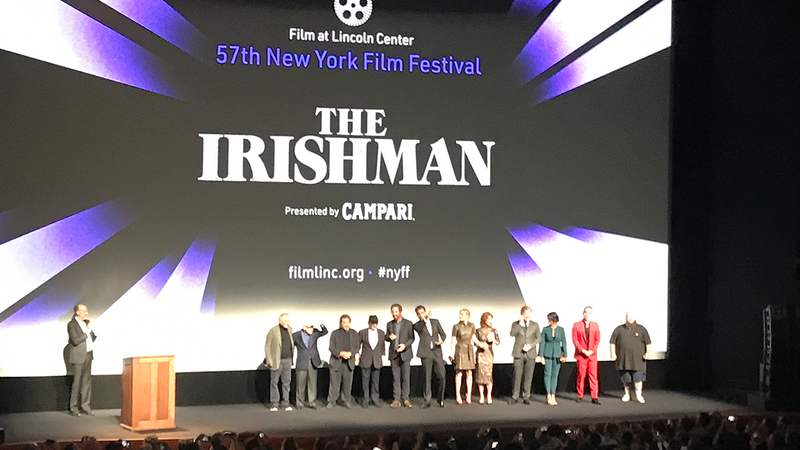 NEW YORK (WABC) -- The 57th New York Film Festival opened with one of the most eagerly anticipated movies in the long career of Martin Scorsese, who got his first big break at the NYFF.

Forty-six years have passed since Scorsese's "Mean Streets" premiered there, and when a couple of the stars of that gangster movie, gathered at Lincoln Center for the premiere of "The Irishman" on Friday night, the occasion was truly special.

The evening had a sweet resonance because it's been so long since they first worked together.

"It's a celebration of all that time and all that time spent in our work," Harvey Keitel said on the red carpet. "Knowing each other, raising families, having a laugh, couple of tears along the way, a wonderful feeling."

He has already generated Oscar buzz for his performance in this, the first movie he has ever made with Scorsese.

"We almost worked together a couple of times," he said. "The big thing is he takes care of you, so you're able to let go and do all kinds of things. Because you know he's got you covered."

The epic nature of "The Irishman" required the stars to look decades younger in many scenes, and Scorsese had to wait until digital technology caught up with his vision for the movie so computers could de-age the stars.

"My career can extend 30 more years," De Niro joked at the opening.

"I was shocked," Executive Director of Film at Lincoln Center Leslie Klainberg said. "I thought it worked very, very well."

Filming took half a year, but these giants of American cinema had such a fine time, De Niro wished the epic shoot could have lasted even longer.

"It was great," he said. "We had a good time. You're always under pressure. But it was a nice pressure, and I would've liked it if we shot for another six months."

"The Irishman" runs three and a half hours and cost $160 million to make. It was financed by Netflix and runs in theaters for the month of November before streaming to homes with a Netflix subscription.

The New York Film Festival runs through October 13th and features many more premieres and carefully chosen movies from around the world.

WABC-TV is one of the festival's sponsors.