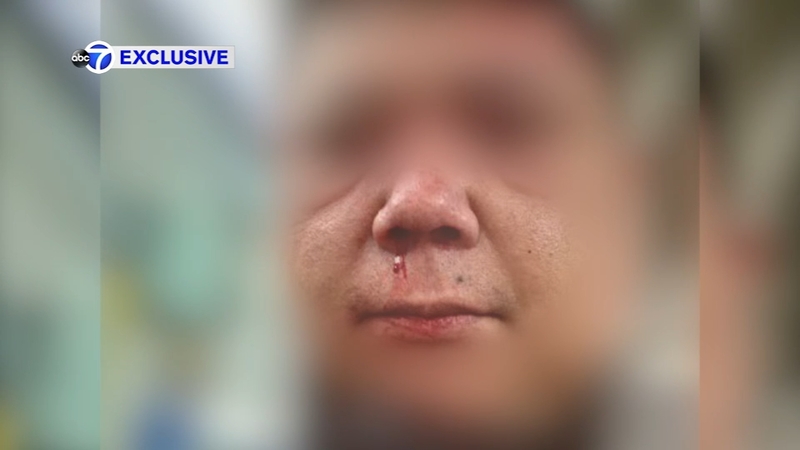 UPPER EAST SIDE, Manhattan (WABC) -- An Asian American man is speaking out after he was punched, repeatedly, in the face at a subway station in Manhattan.

In this Eyewitness News exclusive, a 52-year-old Filipino man from Queens, who asked us not to show his face or use his name, says it was about 7:20 a.m. when he got off the 6 train at the 103rd street station on the Upper East Side.

He says he noticed a man in front of him, possibly Asian, being attacked by another man yelling "go back to where you came from."

That victim managed to escape, but the person who witnessed the incident says the assailant then turned his sights on him, cornered him on the platform and then repeatedly struck him in the face.

The NYPD is investigating yet another crime against a person of Asian descent after a man walking down the street in Hell's Kitchen was attacked Tuesday morning.

Again, the suspect yelled "go back to where you came from."

"It seemed so random and so sudden," said the victim. "Kinda realized it's potentially a hate crime because of what the man was shouting and what was said."

The victim says the suspect appeared relatively young, possibly in his 20s or 30s. He says he didn't appear homeless, but he did seem to be mentally ill.

He says the suspect never tried to rob him or demand any money.

Police are investigating the assault Tuesday night.
Meanwhile, the victim says there was a witness who apologized to him for what happened and told him he tried to catch his attacker.

"He followed the person and according to what he said, beat the crap out of that person. But I think that perp still managed to escape," the victim said.

Aside from a bloody nose, the victim's face is covered in bruises. But he says he's not afraid. He's not even angry.

He says he's speaking out to help raise awareness about anti-Asian hate.

"Just a little worried that something so random can happen. It could happen to anyone," he said.