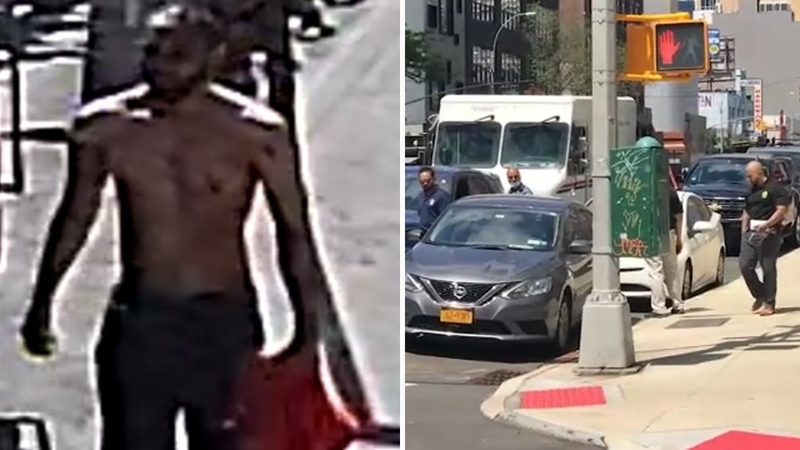 HELL'S KITCHEN, Manhattan (WABC) -- The NYPD is investigating yet another crime against a person of Asian descent after a man walking down the street in Hell's Kitchen was attacked Tuesday morning.

It happened on West 43rd Street and 11th Avenue, where an unknown individual approached the 48-year-old victim and began punching him repeatedly.

He then yelled, "Go back to China" and bit him on the left hand before fleeing the scene.

The tip of his middle finger was severed during the attack.

WATCH | Police released surveillance video of the suspect they are looking for:
EMBED More News Videos

Police have released surveillance video of the man they are looking for in connection to an attack on an Asian man in Hell's Kitchen.

The victim was transported to Roosevelt Hospital where he was said to be stable.

Police later arrested 38-year-old Lloyd Revell at a homeless shelter. He is charged with assault as a hate crime.

"I feel like it's more because of the homeless, there's a bigger issue at stake because of all the people on the street, especially because of COVID and mental illness has a lot to do with it," area resident Susan Pierre said.

Gov. Andrew Cuomo released a statement on the violent attack.

"In what has now become an alarming, disgusting pattern, we have learned that yet another Asian American was attacked violently in Manhattan," Cuomo said. "This needs to end. I want the Asian American community to remember that we stand with them against hate. As New Yorkers we are forever proud of our diversity and we reject any cowardly attempts to divide us. Justice needs to be done and I am directing the New York State Police Hate Crimes Task Force to offer their assistance in the investigation of this attack."

The attack is the third anti-Asian assault in two months in just a few blocks.

The incident happened not far from where a 31-year-old Asian woman who had recently graduated from FIT was attacked with a hammer earlier this month.

And two blocks away in Mach, an Asian woman was told "you don't belong here" before the suspect brutally stomped on her head.

The family of the most recent victim said he is a driver from Long Island who was in the city to pick up a customer when he was assaulted.

He remains hospitalized and his family is tired of the wave of anti-Asian attacks.

They say they are angry and these crimes have made them more aware of their surroundings.

The problem has gotten so bad, even Congress agreed about it, and on Tuesday passed a bill sponsored by Queens Rep. Grace Meng requiring mandatory federal tracking of all hate crimes.

"It's important to know where and what is happening across the country," Meng said. "You can't mend what you don't measure and so it's really important you have good data."