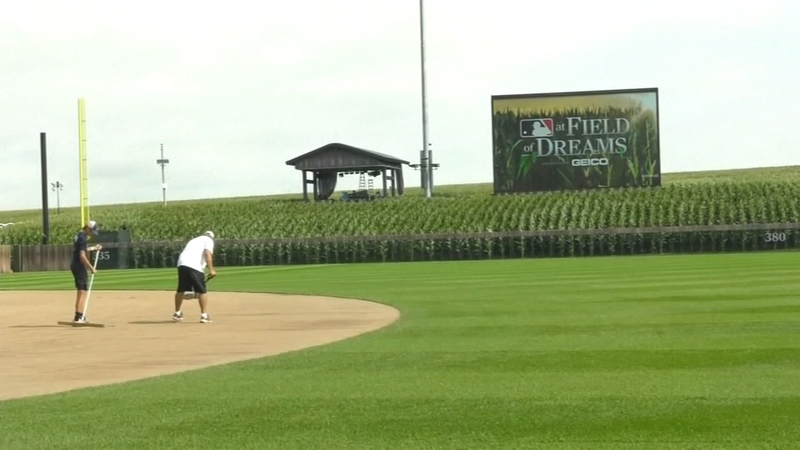 DYERSVILLE, Iowa (WABC) -- If you build it, Aaron Judge will come.

More than three decades after "Field of Dreams" became a hit, one of the most famous cornfields in Hollywood history is finally getting a major league opportunity.

The New York Yankees play the Chicago White Sox in tiny Dyersville, Iowa, next to the actual site used in the 1989 film.

"No matter what, just look to the children because they'll lead the way," Payson's mother said.

Kevin Costner, James Earl Jones, Ray Liotta and Amy Madigan starred in the movie -- but Giancarlo Stanton and Joey Gallo will be the stars on this evening.

A crowd of about 8,000 is expected, a year after the pandemic postponed the original plans to play at the specially built field.

It has been an especially hot and dry summer in that part of the Midwest, so an irrigation system was installed to keep the corn in good shape -- between 10 and 12 feet high.

This is the first professional baseball game to ever be played in Iowa, and fans will be able to make their way into the ballpark through a pathway in the corn.

The design of the park pays tribute to the original Comiskey Park, where the White Sox played from 1910-1990.

The teams will be wearing throwback uniforms inspired by those worn in the early 20th Century.

Scammers are using the fear of rampant banking fraud to lure their victims. It cost one man half his life savings.