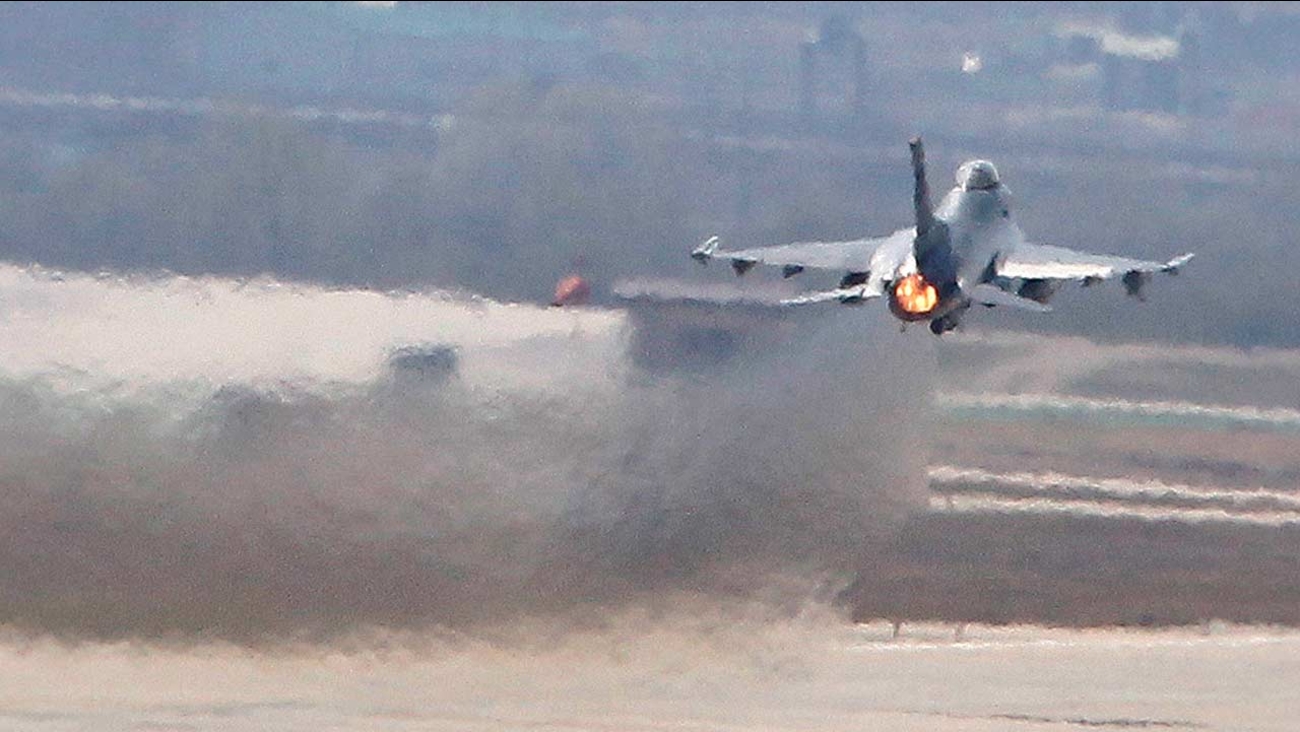 A U.S. Air Force F-16 fighter jet takes off from a runway during a military exercise (AP Photo/Ahn Young-joon)

CHARLESTON, SC -- An F-16 fighter jet smashed into a small plane Tuesday over South Carolina, killing two people and raining down plane parts and debris over a wide swath of marshes and rice fields.

Two people were aboard the smaller Cessna, which was completely destroyed, and both died, National Transportation Safety Board spokesman Peter Knudson said. The pilot of the F-16 ejected and "is apparently uninjured," he said. Lt. Jenny Hyden, a spokeswoman for Shaw Air Force Base in Sumter, said the pilot was taken to the base for observation.

There are not yet any details on what caused the collision or where the planes were traveling, though the NTSB is investigating.

Debris was scattered across a wide area, though there were no reports of anyone being hurt or any homes being damaged on the ground, Berkeley County spokesman Michael Mule said.

There are homes in the area about 20 miles northwest of Charleston, though it is not densely populated, Mule said.

A witness reported that the military plane broadsided the Cessna, said Berkeley County Coroner Bill Salisbury. Officials said during a news conference that most of the debris was in a marshy area, including a rice field.

"We have airboats and boats that are designed to run in the mud," Salisbury said.

Wayne Ware told The Post and Courier of Charleston he was going for a walk when he heard the crash happen. He did not see the initial impact, but heard it.

"I turned around, and I saw the jet. Pieces started falling out of the sky," Ware said, telling the paper the jet's engine landed at a campground.

The Air Force has flown F-16s since the 1970s, though very few active-duty squadrons still fly them. F-16s from Shaw Air Force Base, about 35 miles east of Columbia, routinely fly training missions over eastern South Carolina and the Atlantic.

The smaller plane was a Cessna 150, according to the Federal Aviation Administration, a two-seat plane that debuted in 1959 and remains one of the most common single-engine planes in the U.S.

The Cessna 150's maximum altitude is about 15,000 feet, according to the Aircraft Owners and Pilots Association. Most models weigh about 1,500 pounds when fully fueled. By comparison, an F-16 is about 50 feet long and weighs nearly 10 tons, not counting fuel or weapons.