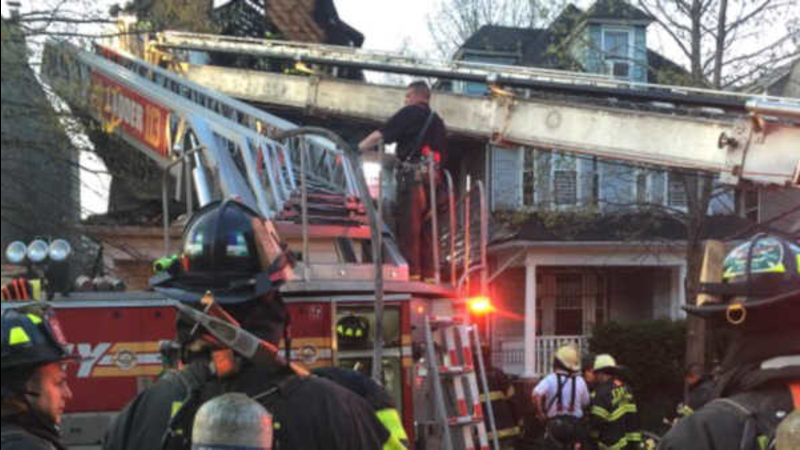 PROSPECT LEFFERTS GARDENS, Brooklyn (WABC) -- A woman who died in a Brooklyn fire that also left eight firefighters injured, has been identified.

Patricia Thomas, 64, died after a fire Monday evening at a home on Fenimore Street. The fire has been put out. The cause of death has not been determined.

The two-alarm fire erupted at 203 Fenimore St. in the Prospect Lefferts Gardens section of Brooklyn. The 911 call came in around 6 p.m. Officials report the first truck arrived within two minutes, but the flames had already gotten the upper hand.

Firefighters believe the deadly blaze began somewhere on the second floor of the one-family house.

There were frantic screams for the mother to climb out the second floor window. Eyewitness News is told her son outside pleaded for her to escape.

"I don't think she was capable of climbing out the window. That's the tragedy. House can be replaced. Mother cannot," said Larry Rushing, the victim's neighbor.

Neighbors said Thomas lived there with her grown son. One hundred firefighters fought to keep the flames from consuming neighboring homes.

Fire marshals are investigating the cause of this blaze while city inspectors will determine if the house needs to come down.

A neighbor inside the home was also injured, and was taken to Kings County Medical Center with smoke inhalation. The injured firefighters suffered minor injuries.