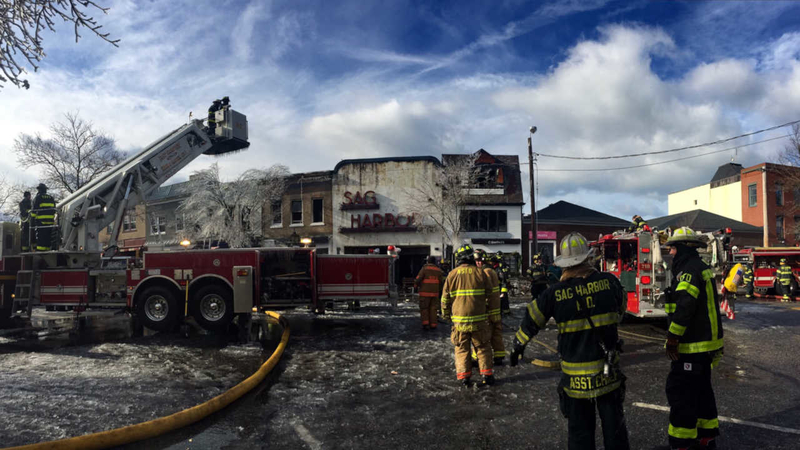 SAG HARBOR, Long Island (WABC) -- A Long Island community came together Tuesday to show solidarity after a devastating fire earlier this month destroyed several businesses, including a historic cinema that dates back to the 1930s.

A candlelight gathering was held in Sag Harbor, where flames tore through a total of nine buildings. The landmark Sag Harbor Cinema, a Main Street mainstay since it was built, was gutted, as was an art gallery. In addition, residents from four apartments above the businesses were displaced.

Sister Ann Marino was one of the event's organizers, and she said she wanted it to be labeled a gathering instead of a vigil, because she didn't want people to be sad. Instead, she hoped it would give everyone a chance to join together and give thanks for the future and for what was not lost.

"I thought just to take time to thank all of the volunteers firemen and all the EMS and all the people who came together on that horrific day of the fire, to stop and to thank them," said Marino, who has lived in the community for 34 years. "We have to dream now for new beginnings, for new life within...we have to come together to share our grief, to share our stories, to share our hopes for the village."

Amazingly, no injuries were reported.

"To celebrate our community, to celebrate all the volunteers, all the first responders, everyone who pitched in," said Lisa Field, of the Sag Harbor Chamber of Commerce.

The fire was believed to have started on a second-floor deck above the storefronts. Roughly 300 firefighters from at least nine different fire departments responded, battling icy conditions in addition to the flames.

"It's amazing how everybody just comes together, and it doesn't make any difference where you're from," Sag Harbor resident John Meighan said. "Everybody helps, and that's why we're down here now."

The theater, which had been put up for sale earlier this year for $14 million, was the most significan casualty of the fire. Firefighters who grew up going to the cinema and whose parents went as children themselves struggled unsuccessfully to save it.

"The community was tremendous, and the support they gave us, for us to put the fire out," Sag Harbor Fire Chief Tom Gardella said.

The gathering was held on the Long Wharf Village Pier at the intersection of Wharf Street and Bay Street.