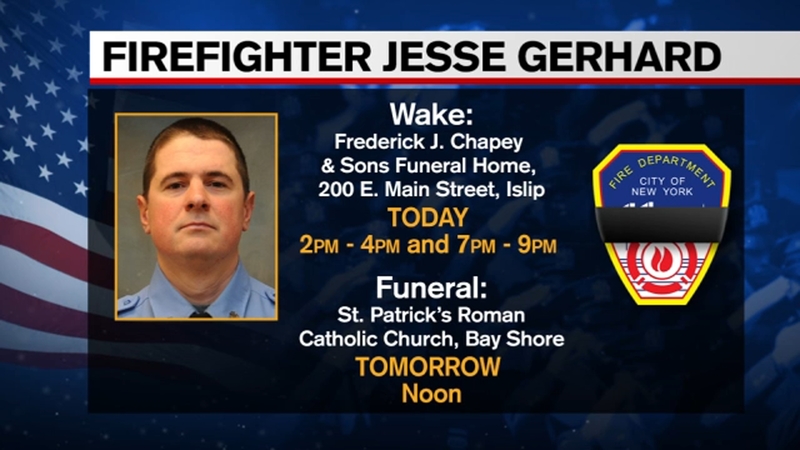 ISLIP, Suffolk County (WABC) -- A wake is being held for a fallen New York City firefighter who died in the line of duty.

The wake for Jesse Gerhard is being held Tuesday afternoon in Islip.

His funeral will be held at noon Wednesday at St. Patrick's Roman Catholic Church in Bay Shore.

The 33-year-old died last Wednesday when he collapsed at his firehouse just one day after battling a house fire in Far Rockaway, Queens.

Last week, the FDNY hung bunting at the firehouse, Ladder 134 on Central Avenue.


Gerhard joined the FDNY as an Emergency Medical Technician in July 2014 and was first assigned to Station 10 in Manhattan and later served at Station 47 in Far Rockaway.

He entered the Fire Academy in December 2017, and after graduating in April 2018, was first assigned as a Firefighter to Engine Company 264 in Far Rockaway.

In March 2020, he transferred to Ladder Company 134, located in the same firehouse as Engine Company 264 in Far Rockaway.

He was honored for bravery once in his career, the FDNY said.

Firefighter Gerhard is the 1,156th member of the FDNY to die in the line of duty.

The last member of the department to die in the line of duty was Lieutenant Joseph Maiello, who died on December 26, 2021.