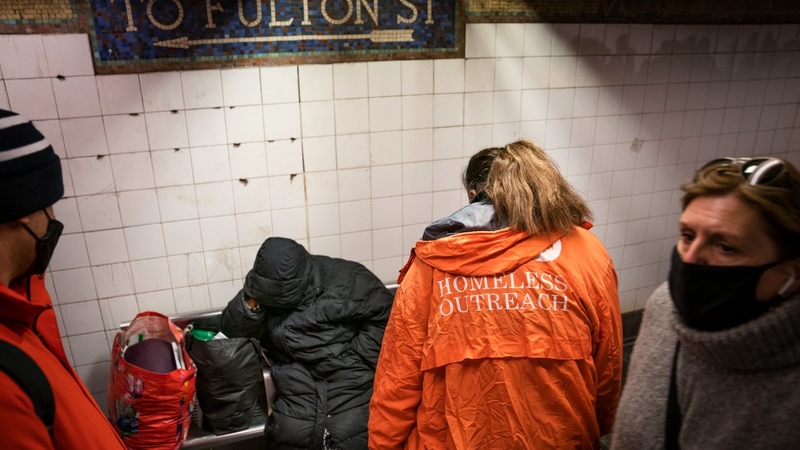 Teams were expected to mobilize throughout the subway system on Monday night to each of the first six targeted lines -- the A, E, 1, 3, N and R -- with each team consisting of two police officers, an outreach worker, and a clinician.

They plan to address homeless and provide services as they see them, though they do not expect they will get to the "end of line" portion of the initiative on this shift.

As part of the plan, anyone who doesn't get off the train at the end of the line will be escorted off.

However, some people like John Timpa say they have no where else to go.

"If I gotta keep going through this I wish I was dead - don't do that - I'm not gonna do it. But I'm gonna try everything in my power so it don't happen. But I don't wanna live like this. Who wants to live like this?" homeless New Yorker John Timpa said.

Timpa says he's been homeless since October. Since then, the transit system has been his shelter.

But with the mayor's plan going into effect, Timpa was told by officers on Monday that he has to go.

"They just kept telling me to get out get out get out. Go outside. Yeah, go outside. Oh yeah, I told them I got nowhere to go," he said. "He said there were stabbings with people and that's why they're getting on me. But I'm not the one that did it."

Homeless advocates are supposed to be patrolling with officers so that the homeless are given a housing option, not just being kicked to the street.

As for Timpa, he says he re-entered the transit system minutes after he was told to leave because he doesn't have a better option.

The rollout comes after a bloody 48 hours in the New York City transit system. Six people were stabbed from the Bronx to Midtown Manhattan to Brooklyn, one rider was confronted by a man with a hatchet, and another was beaten with a metal pipe.

Evelina Rivera had a close call with a man Monday morning while on a 4 train in Melrose section of the Bronx, exchanging words with a man on the train.

"He was already in the train, he was sleeping," she said. "He comes at him, strikes a pole, breaks a window, a subway window. He's swinging, hits me, and then we get off."


Fortunately, she is OK.

"I'm going to be a little more careful, I'm going to start carrying something with me so I feel a little bit more protected," she said.

Eleanor Bethel is like many subway riders. She wants results, and she wants them fast.

"I was thinking about what the mayor said, so I'm like, where are the policemen? And I don't see any," she said. "So where's the protection? It's supposed to start today. Today is today."
Last week, Adams promised action in a sweeping subway safety plan.

Police officers are expected to enforce the MTA's Code of Conduct, which forbids things like panhandling, smoking, sleeping on trains and boarding trains with piles of trash and possessions.

Riders Guy Tillman and his wife, Sharone, often travel the subway with their twin girls. They praised the mayor for trying to tackle the problem, because like so many New Yorkers, they feel vulnerable underground.

"It's an opportunity for him as a new mayor to really make a difference," Gary Tillman said. "So we think that's important. It's very important that we feel safe, and not like our lives are in danger."