Man wanted in connection with robbery in Flatiron district captured 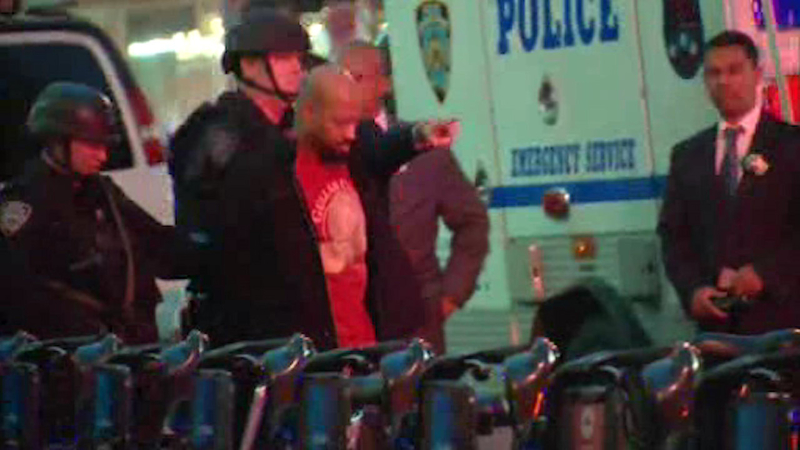 FLATIRON, Manhattan (WABC) -- A man wanted for robbing a woman's apartment in the Flatiron district has been captured after a massive manhunt.

The office building was on lockdown for at least 2 hours.

During the search the entire block was flooded with heavily armored police and K-9 units.

It was just around 5 p.m. Thursday when police took the suspect into custody.

Wearing a red t-shirt and black jacket, he was brought out in handcuffs as employees from their windows cheered on the NYPD.

According to police, this man was wanted for a larceny Thursday morning at 66 Madison Avenue between 27th and 28th streets. He has since been identified as 33-year-old Born Poledore. Police said he's homeless.

That's just a few blocks away from where the man was arrested.

Police say a 41-year-old woman came home and found him standing in her doorway with her watch in his hand just before 10 a.m.

He allegedly pushed her as he fled.

She was not hurt.

Poledore was tracked to the commercial office building.

Police say he was arrested on the 8th floor, but employees there say the suspect entered through the basement.

They described some very tense moments as they nervously waited for this search to end.

"The first thing I said was, 'God please don't let him have a gun.' Because it can get ugly, it can get crazy. So I called home and let my husband know that I'm here, that I'm safe," said Bernadine Rainford, an employee.

"I called the security personnel at the front desk here in the lobby of 261 5th Avenue and he told me that the police were here, there was an intruder in the building that robbed another building in the neighborhood, and that they had video footage on their closed circuit television of him entering our building through a basement window," said Michael Kaplan, a building worker.

It is not yet known if Poledore was armed.

But the situation ended without anyone getting injured, so there are many in the neighborhood breathing a sigh of relief.