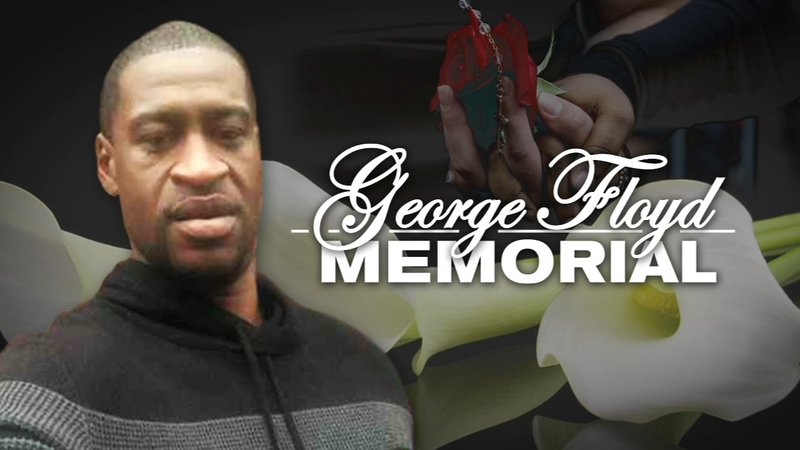 RAEFORD, N.C. -- George Floyd's life was remembered and honored in a second memorial service Saturday, this time in Raeford, North Carolina, near where he was born.

Approximately 15,000 people went to Raeford (a small North Carolina town with a population of about 5,000 people) to pay their respects to George Floyd.

The service began shortly after 3 p.m. with church clergy and Floyd's family proceeding down the aisle of Cape Fear Conference B Headquarters.

Rev. C David Stackhouse began the service with a call to worship. He said in his talks with the family they told him how important it was for everybody to come together to worship the Lord.

Next, Will Harris, the Minister of Music at Lewis Chapel Missionary Baptist church, led the service in a rendition of Total Praise.

Rev. Al Brice of Covenant Love Church in Fayetteville then stood up and said to Floyd's family, "We love you very much. We offer all our condolences. Praise the lord." He then read Psalm 23.

After a moving prayer by Bishop Benjamin Sutton, Tara Melvin took the microphone and sang Lord Do It For Me Right Now.

Isaac Floyd, George Floyd's uncle, then stood up to sing I Won't Complain.

Before starting the song, an emotional Isaac Floyd identified himself and humbly said, "I don't want to make a mess of this."

"We too in this world have a purpose, just like George Floyd, in unifying this nation, Diana Shipp said as she gave the acknowledgements of the service.

She said the family was grateful for every effort of kindness and compassion as they mourn the passing of George Floyd. She specifically took time to thank everybody who sent cards and letters to the family; she said the family would read every single one of them together, in private as a family.

Next, Jeremy Collins, a representative for Gov. Roy Cooper, presented George Floyd's family a flag that flew at the state capitol June 3, 2020.

A representative of the Lumbee Tribe of North Carolina then presented a resolution to the Floyd family, vowing that the Lumbee Tribe stood with them and pledging to support ending systemic racism in America.

George Floyd's stepmother, Ruby Floyd, stood up and gave moving remarks which ended with a praise break where much of the audience rose to their feet to worship.

"God is on our side," Ruby said. "We bringing back love to the universe."

Hoke County Commissioner Chairman James A. Leach then thanked the Floyd family and extended condolences from the Hoke County government.

"It's been a long night, but morning will come," Leach said. He said that message was meant threefold: for the USA, for North Carolina, and for the Floyd family.

Christopher Simmons then took the microphone and explained that he had just removed his facemask to speak because "there's something far worse in the air right now."

He was referring to systemic racism and police brutality. He called the protests happening around the country an "allergic reaction to an ongoing issue in the United States."

Hoke County Sheriff Hubert A. Peterkin said he was hurting but knew it was important for him to share his message today.

"If I deny all the wrong law enforcement is doing today. I am denying the color of my skin," Peterkin said. "There is a lot of good police officers in this world...but we can't afford to have 1 or 2 percent doing the mess that we're seeing right now."

"I don't care what George did. We as law enforcement officers don't have the authority to bully, push people around and kill them because we have on a badge," Peterkin said.

"We as law enforcement officers don't have the authority to bully, push people around and kill them because we have on a badge."

Next, Rep. G.K. Butterfield extended condolences and announced that the House of Representatives was working on legislation in response to the police brutality that ended Floyd's life.

He said a vote on the legislation would happen by the end of June.

Butterfield went on to say that change was coming, and assured the Floyd family that the "death of your beloved George would be the catalyst that would bring much needed reform to the criminal justice system."

He began by reading from 1 Kings 18. Then he moved on to talking about systemic racism in America. He said while it took less than 9 minutes for officers to kill George Floyd, it was a murder 401 years in the making.

"A fire of civil rights was re-lit in this nation," Stackhouse Sr. said.

He pointed out that while the murder of George Floyd appeared similar to past events, it felt different. He said he noticed people who usually stay silent speaking up about racism; he saw white and hispanic faces outnumbering black faces at the protests for justice.

He said those type of changes were evidence of God's hand moving in America.

"It was George Floyd--Perry Jr. what they called him--that sparked the fuse that's going to change this nation," Stackhouse Sr. said.

After Saturday's memorial, a public viewing will be held Monday in Houston, where he was raised and lived most of his life.