Neighborhood Eats: Kosher Mexican on the Upper West Side 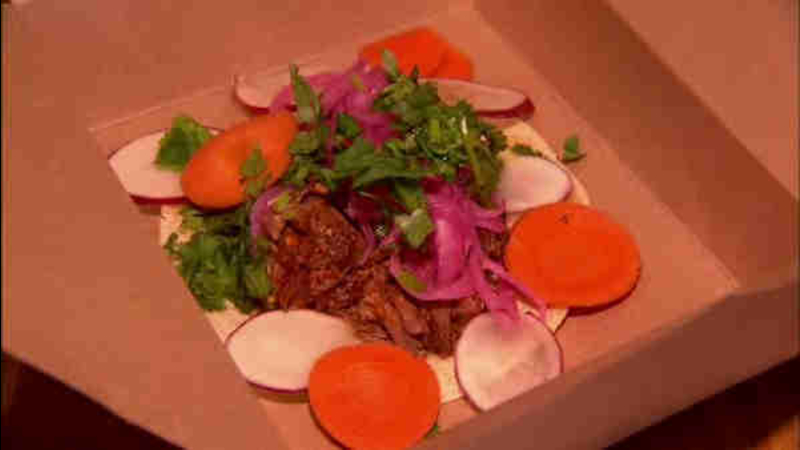 Neighborhood Eats: Kosher Mexican on the Upper West Side

NEW YORK (WABC) -- A chef who gained notoriety in Los Angeles has decided to bring his unique cuisine to Manhattan.

Katsuji Tanabe is half-Japanese but was born in Mexico. And he recently opened Mexikosher, his brand of fast casual Mexican food that's all kosher, on the Upper West Side.

"We have the highest level of certification in the city," Tanabe said. "We want to make sure our customers feel safe that they're getting a great meal with the right certification."

And that's certainly important for those who observe strict kosher dietary laws, but Tanabe wants his food to appeal to everyone. And that means cheese or dairy, which can't be served because of the kosher rules, are absent from the burritos and other Mexican staples. But Tanabe said that's actually the way it should be.

"I would never go to Mexico and order a taco with cheese on a taco stand or put sour cream on a taco," he said. "That's completely wrong...It's only when we come to America that we put the cheesy toppings on. That's not really authentic Mexican."

Instead, he relies on emphasizing the meat and the spices, as in the recipe for lamb birria.

He marinates kosher lamb in ground cloves, oregano and guajillo peppers, which are smoked on the grill and then pureed.

The guajillo pepper is one of the most if not the most important peppers in Mexican cuisine, as one of the chief sources of flavor.

The meat cooks for 10 hours and basically falls apart onto the freshly made tortilla with whatever toppings you'd like.

Here's the recipe from Chef Tanabe of Mexikosher.

Instructions
- On a dry pan: toast the dry guajillo peppers for 5 mins and then puree
- Toast the garlic
- Toast the rest of the spices
- Blend everything with half a quart of chicken stock
- Marinate the lamb with the sauce and cover the rest with chicken broth for 3-6 hours in refrigerator
- Cook in oven for 10 hours at 220 degrees
- Pull the meat and serve with fresh cilantro, lime and onions on top of fresh warm tortilla
Related topics:
food & drinknew york cityupper west sidemexicofoodrestaurants
Copyright © 2021 WABC-TV. All Rights Reserved.
TOP STORIES
5 cases of omicron COVID-19 variant detected in New York
Man accused of stealing school bus, crashing into 15-20 parked cars
NYC announces vaccine mandate for religious, non-public schools
Antonio Brown allegedly asked chef to obtain fake COVID vaccine card
DOT investigating how anti-vaccine poster ended up in NYC bus stop
What to know about holiday shipping deadlines, delays
Parents, teachers protest overcrowded classrooms across NYC
Show More
NYPD top cop, 2nd in command will step down at end of month
AccuWeather: Back to blustery
Eddie Mekka, 'Laverne & Shirley' actor, dies at 69
Nassau Coliseum Toys for Tots drive to kick off this weekend
Victim speaks out after possible hate crime in the subway
More TOP STORIES News