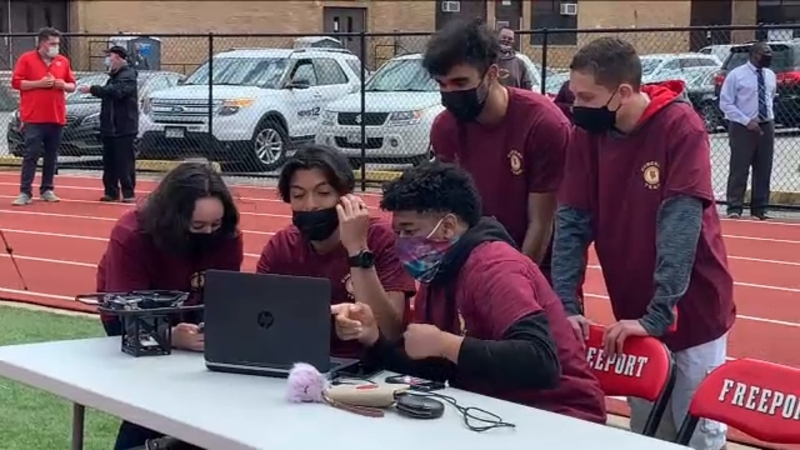 The district is the only one in the state, and one of five nationally, taking part in the U.S. Department of Education/NASA CTE Mission: CubeSat Challenge.

The team at Freeport High School worked four months to put this together their cube satellite or "CubeSat."

All of the materials cost about $250 to build the satellite.

A computer is in the middle, red wires connect to batteries and the black box frame protects it.

"Each of these structured designs was printed and assembled from a 3-D printer and all of the components," Freeport High School teacher Richard Johnson said.

The rover landed safely on the Red Planet last week and now the SuperCam will analyze terrain the rover cannot reach.

The student-designed 10cm cube nanosatellite prototype was launched into the sky Tuesday afternoon.

The launch was part of the challenge's Flight Week.

If successful and selected as the winner of the U.S. DOE/NASA competition, Freeport's CubeSat will be launched into space by NASA!

The nanosatellite will simultaneously feed research gathered in space to Freeport students for their own analysis and use.

"Whenever we tested any component, we always failed the first time and then they would have to do it again the students were frustrated they had to work through frustration," Freeport District Science Director Dr. Vincent Pereira said.

The launch was conducted via drone, under the FAA airspace limits, to test the CubeSat's ability to gather environmental observations that will study the differences in heat absorption and retention between urban and rural areas.

Another scientist who worked on a CubeSat was NASA Engineer Mimi Aung, who headed up the team that just flew the first helicopter on Mars. She worked on one in college 30 years ago - not bad company.

The Ingenuity helicopter has successfully completed its historic flight on Mars and safely landed back on the surface, according to NASA.

So win or lose, these students and their teachers have already come out on top.