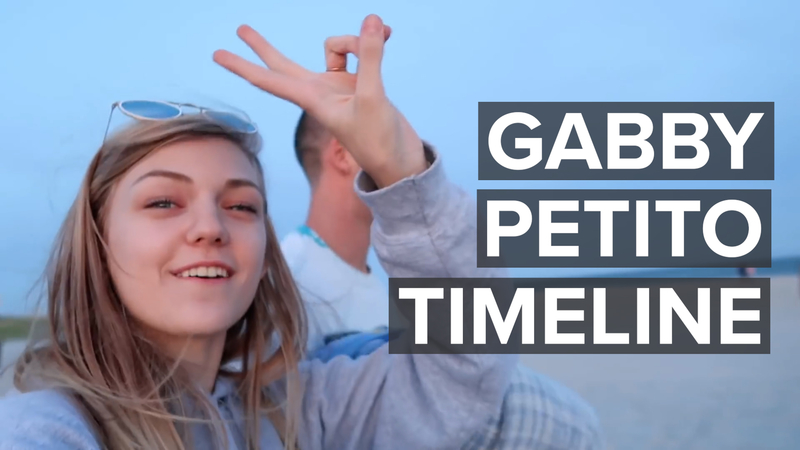 MOAB, Utah (WABC) -- High school sweethearts, Gabby Petito and Brian Laundrie had set out in July in a converted van to visit national parks in the West. They got into a fight along the way, and Laundrie was alone when he returned in the van to his parent's home in September, police said.

Here's a timeline with what we know so far:

The couple had been in Blue Point, New York, where Petito is originally from, to celebrate her younger brother's graduation from high school. They departed New York on July 2 on a planned four-month cross-country journey.

According to a Petito family attorney, the pair had gotten engaged, but postponed their wedding plans because of the coronavirus pandemic and decided to take the trip instead.

They were driving Petito's white 2012 Ford Transit van, which, according to one of Laundrie's posts on Instagram, they converted the interior to allow them to camp and cook meals inside of as they traveled.

According to their social media posts, the pair traveled from Florida to Kansas, Colorado, and Utah, touring and camping at several national parks and natural attractions.

In August, police had an encounter with Petito and Laundrie, and the pair was described as having "engaged in some sort of altercation," according to a report released by the Moab City Police Department.

Officers were called to reports of disorderly conduct and encountered Laundrie and Petito, along with a witness whose full name was redacted from the report.

Laundrie and Petito are described as having gotten into a physical fight following an argument, but "both the male and female reported they are in love and engaged to be married and desperately didn't wish to see anyone charged with a crime," according to the report from Officer Eric Pratt.
Police later released body camera footage of officers' encounter with Petito and Laundrie, during which Petito is emotional and crying through much of the video.

Laundrie says the couple got into a minor scuffle that began when he climbed into the van with dirty feet. Petito admits that she slapped Laundrie when she thought he was going to leave her in Moab, and the couple also states that Laundrie did not hit Petito.

Laundrie has visible scratches on his arms, face, and neck, and police took photos of his injuries. Petito was nearly arrested, but since both parties said they were in love and didn't want charges pressed, the couple agreed to separate for the night. Laundrie was put up in a hotel by a domestic assault outreach group.

According to a verified GoFundMe page set up to raise money and aid in the search for Petito, she was "last known to be in Grand Teton, Wyoming on 8/25/21 heading towards Yellowstone National Park."

"She would go off the grid... doing her van life stuff, exploring these different areas. So it wasn't uncommon for her to go off for few days at a time, but she'd always make her way back to someplace where she could get on to a Wi-Fi connection, upload to her Instagram, make phone calls, FaceTime," he said.

"Someone who's been traveling and contacting family and then all of a sudden goes dark -- that's obviously odd," Josh Taylor, a spokesperson for the North Port, Florida, police department, told CNN on Tuesday.

Her family said they do not believe that that message was sent by Gabby.

Laundrie allegedly returned to the North Port home he and Petito shared with his parents on September 1.

Police said he had driven the van there and Petito was not with him.

On September 11, Petito's family reported her missing to the Suffolk County Police Department in New York at approximately 6:55 p.m.

When police in Florida knocked on the Laundrie's that night, his parents handed them a lawyer's phone number.

"We don't know what Brian knows, that's the bottom line," Taylor said. "We are hopeful to talk to him. He needs to talk to us. We need to know exactly where he was, where she was, their last locations, and the fact he was back here for 10 days. Again, the family reported her missing 10 days later. "

Their van was processed for evidence, and Taylor said some materials will be investigated further.

On Wednesday, Laundrie was officially named a person of interest in Petito's disappearance and North Port Police said he was hindering the investigation.

Laundrie has not made himself available to be interviewed by investigators or provided any helpful details.

His attorney issued the following statement on behalf of his client, addressing Laundrie's silence.

"Many people are wondering why Mr. Laundrie would not make a statement or speak with law enforcement in the face of Ms. Petito's absence. In my experience, intimate partners are often the first person law enforcement focuses their attention on in cases like this, and the warning that 'any statement made will be used against you is true, regardless of whether my client had anything to with Ms. Petito's disappearance. As such, on the advice of counsel, Mr. Laundrie is not speaking on the matter. I have been informed that the North Port, Florida, police have named Brian Laundrie as a 'person of interest' in this matter. This formality has not really changed the circumstances of Mr. Laundrie being the focus and attention of law enforcement, and Mr. Laundrie will continue to remain silent on the advice of counsel."

Kristin Thorne has the latst details in the search for missing Long Island woman Gabby Petito.

Police in North Port held a news conference during which Petito's father begged for her safe return -- and for Laundrie to speak up and stop hindering the investigation.

Later, Petito/Schmidt family attorney Richard Stafford read aloud a letter to Laundrie's parents pleading for their son to speak to them about Gabby's disappearance.

Hours after the family of 22-year-old Gabby Petito issued a statement to the family of her fiancé, begging for information in her disappearance, Brian Laundrie's sister, Cassie Laundrie, broke her silence in an exclusive interview with GMA.

"Obviously me and my family want Gabby to be found safe," she said. "She's like a sister and my children love her, and all I want is for her to come home safe and found and this to be just a big misunderstanding."

September 17: No connection to double-homicide case

Despite earlier speculation, authorities in Utah announced Friday that Petito's case has no connection and is not related to the double-homicide case involving Crystal Turner and Kylen Schulte.

They claimed they had not seen Brian since Tuesday.

They removed items from the Laundries' house to assist in the search for him, according to his attorney Steven Bertolino.

Police said on Twitter that it was the first time the Laundrie family had spoken with them in detail about the case.

They reiterated that Brian is a person of interest in Gabby's disappearance, but that they are "not currently working a crime investigation."

Both he and Petito are now considered missing persons.

Police searched a vast Florida wildlife reserve on Saturday for 23-year-old Brian Laundrie, a person of interest in the disappearance of his girlfriend, Gabrielle "Gabby" Petito, while across the country the FBI hunted for clues about the missing woman in a mountainous national park in Wyoming.

The search was called off Saturday night by North Port Police due to darkness. They say nothing was found.

Our search of the Carlton is being called this evening due to darkness. Nothing found. Efforts will begin again Sunday morning. pic.twitter.com/l7L8B9hHrM

Meanwhile, the FBI in Denver said Saturday that agents were conducting ground surveys at Grand Teton National Park in Wyoming, with help from the National Park Service and local law enforcement agencies, seeking clues to Petito's disappearance. Her last known contact with family members was from the national park known for its mountainous terrain.

September 19: Body found in Wyoming believed to be Gabby Petito

Authorities say a body discovered Sunday in Wyoming is believed to be Gabrielle "Gabby" Petito. The FBI said the body was found by law enforcement agents who had spent the past two days searching campgrounds. An FBI agent said the cause of death had not yet been determined.

Laundrie has been identified as a person of interest in the case. He was last seen by his family in Florida on Tuesday and investigators have been searching for him.

Police and FBI agents armed with a search warrant swarmed the Florida home Brian Laundrie shared with his parents.

The FBI escorted Laundrie's parents out of their home into a waiting van in their driveway at 10:00 Monday morning. They were in the car for about 10 minutes before going back inside.

BREAKING: Brian Laundrie’s parents are brought out of a FBI vehicle in their driveway and back into their home. pic.twitter.com/MLdIZh7ALW

Investigators were inside the home with the family all day. Around 2:30 in the afternoon they towed Laundrie's silver mustang from the driveway. They also removed evidence boxes. The search warrant indicated they were looking for Laundrie's computer.

Laundrie and Petito had been living with his parents before making the trek.