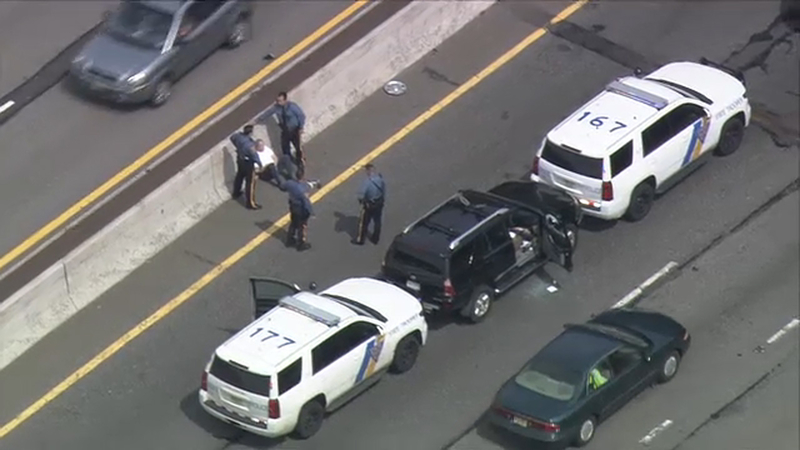 CRANFORD, New Jersey (WABC) -- New Jersey State Police troopers used their vehicles to stop an SUV on the Garden State Parkway after the driver suffered a medical episode behind the wheel Thursday.

It happened in the northbound lanes near milemarker 138 in Cranford.

A man suffered a diabetic emergency, and numerous motorists had called in to report the vehicle moving erratically on the highway.

Authorities say the troopers spotted the man and followed him.

They then used their patrol SUVS to surround the vehicle and slow it to a stop by milemarker 147 in East Orange.

As one trooper moved to the driver's side, he realized the motorist needed medical assistance.

"Elderly male, spaced out, at times having his eyes closed," said Trooper Israel DeLaRosa. "At no point did he look to his right or left."

Officers followed the vehicle for six miles. One trooper got in front of the swerving vehicle to bring it to a stop.

"HIs car was still in drive and I could see in his eyes he was out of it, very lethargic," said Trooper Juan Daniel Vecchio.

Luckily the mototorist suffering the emergency was going at a slow rate of speed.

"We eventually had to break the window to put the car into park and get him out and get the medical attention he needed," said Vecchio.

Once the 67-year-old driver was safely out, officers checked through his vehicle and found the glucose packs the driver needed to revive.

"We were able to see the medical bracelet on him and identify the oral glucose which we administered there to get him back alert," said DeLaRosa.

The driver was removed by paramedics and is expected to be fine.

His vehicle was towed by troopers, who are based at the Bloomfield barracks.