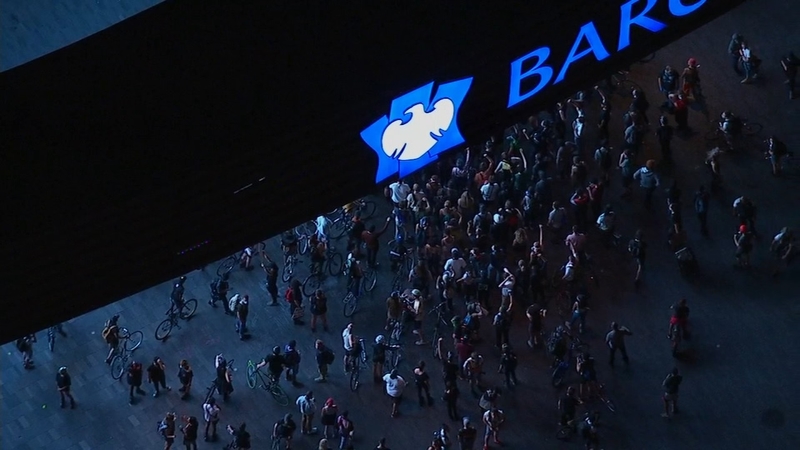 Nearly 300 demonstrators marched up Atlantic Ave towards the Barclays Center. Police were seen escorting them, as they marched.

Earlier in the day, estimated 20,000 people protesting the death of George Floyd were on the move from Brooklyn to Manhattan over the Brooklyn Bridge Saturday evening, and are headed to Washington Square Park and other parts of the city.

Other large groups were in Central Park, including a gathering of medical workers who took a collective knee on Fifth Avenue at 7 p.m. the same time as the nightly "clap because we care" tribute to health care workers fighting the COVID-19 battle. They took a knee for 8 minutes and 46 seconds, the length of time a former Minneapolis police officer placed his knee on Floyd's neck. One medical worker told Eyewitness News that the pandemic of racism has plagued society far longer than the novel coronavirus.

Another group in Columbus Circle held a moment of silence and took a collective knee, scenes echoed around town. They marched through the Upper West Side, making their voices heard.

Large groups of protesters made their way through the Upper West Side on Saturday evening.

Throughout the day, thousands walked with signs, chants and a message.

An estimated 15,000 people protesting the death of George Floyd were on the move from Brooklyn to Manhattan over the Brooklyn Bridge Saturday evening, and other large groups were i

Earlier, thousands marched from Union Square to Washington Square Park, one of more than a dozen protests around the city, some starting in Harlem Saturday morning.

"I think they are right. New York is going to lead the way on this change. We have always done it and we will continue to do it," Governor Andrew Cuomo said Saturday.

Protests were held across the region as local demonstrations entered their 10th day. In Union County, New Jersey, a protest was held in Scotch Plains, with marchers united in their calls for change. It was the second such protest in Scotch Plains this week.

The curfew was implemented in New York City on Monday, and is set to expire Sunday morning. It was spurred by several nights of violent protests and looting set against large peaceful demonstrations in Brooklyn and Manhattan.

The violence subsided as the week progressed, with many of the recent arrests resulting from curfew violations, The NYPD has detained 2,554 people in total since last Thursday, arrested 1,079 people and issued 1,475 summonses.

While protests remained mostly peaceful in New York City Friday night, there were a number of arrests in Brooklyn as people continued to protest past the curfew.

Police say at least 40 arrests - far fewer than previous nights - were made as a large group of protesters gathered at Grand Army Plaza.

With police generally allowing some leeway, crowds mostly dwindled on their own at various locations.

But there were some minor flare-ups: About an hour after a Brooklyn protest ended, images on social media showed officers surrounding a group of protesters and chasing down some with batons.

A man identifying himself as state Senator Julia Salazar’s comms director (Michael Carter) was charged at by officers and is being arrested. pic.twitter.com/joo4RxH17J

Brooklyn remained the focal point of the protests, specifically on Flatbush Avenue.

Officers on Manhattan's East Side also used force to break up remnants of a march that started near the mayor's official residence.

Around 500 peaceful protesters gathered at Columbus Circle Friday evening. Some protesters on the Upper West Side even broke out into song and dance. Clusters of protests were reported elsewhere in the city, including a large group marching down Flatbush Avenue on the Prospect Heights/Park Slope border after 9 p.m.

The citywide curfew implemented to stem looting has been in control, but enforcing the curfew has led protesters to clash with the police.

Governor Andrew Cuomo has asked the state's attorney general to investigate on some claims of police misconduct while making arrests.

With demonstrations and marches planned throughout the day and into the evening on Saturday in Manhattan, Brooklyn and the Bronx, local politicians and civil liberties advocates have been calling for an end to the 8 p.m. curfew. They've complained that it causes needless friction when officers try to enforce it.

But Mayor Bill de Blasio has insisted the curfew will remain in place throughout the weekend.

RELATED STORIES:
Friday coverage of protests and looting in NYC