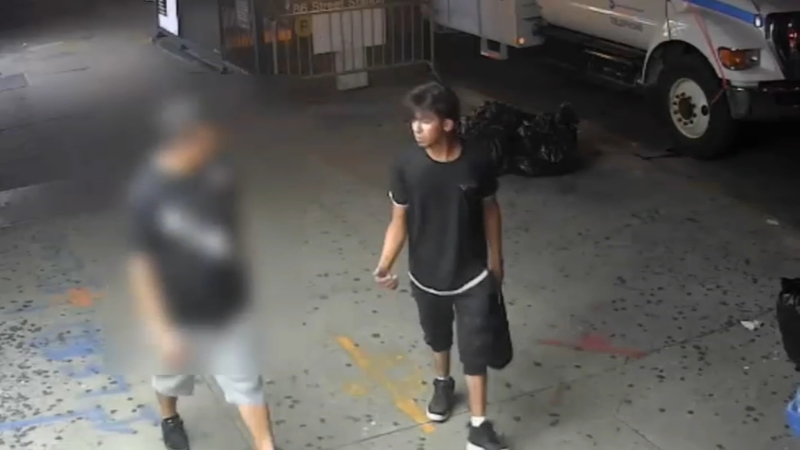 BAY RIDGE, Brooklyn (WABC) -- A good Samaritan stepped in to stop an attempted rape in Brooklyn, but authorities continue to search for the perpetrator.

Police released a photo of the man they say forced a 27-year-old woman into an alleyway near 90th Street and 5th Avenue in Bay Ridge at about 1:30 a.m. on Aug. 25th.

"I was looking around because I heard crying and noise," said Mariam Eladem. The sounds were coming from the victim, behind Mariam's home in Bay Ridge.

Others living along 90th Street also heard the commotion.

"It was like some woman screaming and I heard a help and I thought I was dreaming and I fell back asleep," said Jackelyn Pena.

Police say the attacker threw the woman to the ground, ripped off her clothing and started to sexually assault her.

But the good Samaritan got involved and struggled with the suspect.

In surveillance video obtained by Eyewitness News, the man in the white shirt is seen chasing after the attacker, who eventually ran away.
EMBED More News Videos

"When I got there he was try to rape her And she was on the floor with her pants under her knees," said the man who intervened, who did not want to disclose his identity.

He said he then sprang into action.

"What I did was I grabbed him from the back and I tried to stop him, but at the same time he was getting angry because he couldn't do what he wanted to do so we started to fight," he said.

"Suddenly these two guys ran out of the street and were fighting, hitting each other," said witness Mariam Eladem.

Seconds later she saw the victim walking away.

"I felt so bad because I heard her and if I had gotten up and listened to my gut maybe I could have helped her," said Pena.

Video of the suspect was captured several blocks away on 86th Street and 4th Avenue near the R train stop before the assault .

The suspect is described as a Hispanic man with a goatee. He was last seen wearing a black T-shirt, black and white sneakers and dark colored shorts.