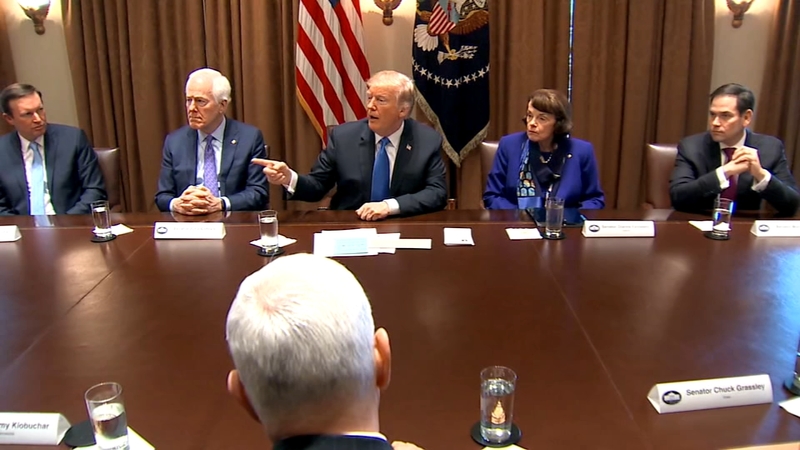 WASHINGTON -- President Trump is expected to unveil a list of priorities aimed at preventing gun violence in schools.

The announcement follows an hour-long brainstorming session with members of both parties.

But overnight, the NRA made it clear that it's not on board with the president's suggestions.

"You're afraid of the NRA right?" Trump said.

The president repeatedly took positions that put himself at odds with the NRA and Republicans.

"We can't get it done. Nothing else like that, where it works, people want it. And we can't do it," Murphy said.

The president even disagreed with Vice President Pence.

He says, in some cases, law enforcement should take weapons from someone identified as a possible threat, even if it violates due-process rights.

"Allow due process so no one's rights are trampled but the ability to go to court, obtain an order and then collect not only the firearms but any weapons in the possession," Pence said.

"Or, Mike, take the firearms first and then go to court," Trump said.

The NRA quickly reacted to that exchange, strongly disagreeing with the president.

"The NRA is also going to protect due process for innocent Americans," said Dana Loesch, NRA.

The president also brought up another idea that the n-r-a firmly opposes: raising the minimum age to buy assault-style weapons-such as the AR-15 used in the Parkland shooting to 21 years old.

Walmart says it will stop gun and ammunition sales to anyone under 21.

And Dick's Sporting Goods says it will no longer sell assault-style rifles, and will also ban the sale of all guns to anyone under 21.