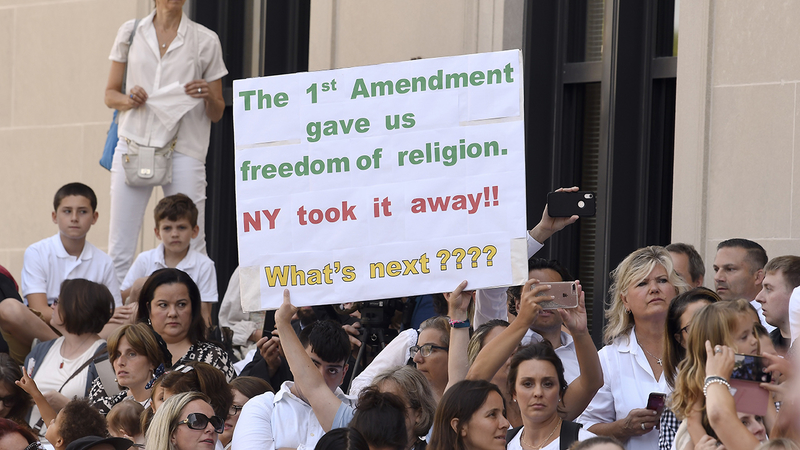 NEW YORK (WABC) -- Time is running out for thousands of parents in New York to comply with a new state law eliminating religious exemptions from immunizations such as the measles, mumps and rubella vaccine.

Analysis by "7 On Your Side Investigates" of enrollment records and vaccination rates provided by the state indicate more than 26,000 students held religious exemptions in the 2017/2018 school year.

Under the law passed in June 2019, the parents of those unvaccinated students were given a 14-day grace period from the start of school to show they had taken initial steps to comply with vaccination requirements and that their children had received at a minimum the first age-appropriate dose in each required immunization series.

"I have been losing a lot of sleep, anxiety, my blood pressure is going up," said Cathy Orofino, a Long Island mom who previously held religious exemptions for her boys. "It's repealing people's freedom of choice, freedom of medical choice, and I just don't see how that's possible in America."

Orofino said she believes children are born with a God-given immune system.

"I believe that it's sacred and that is should not be interfered with by man or toxic chemicals," Orofino said. "I think everyone has to make their own decisions about vaccines."

Orofino has decided not to vaccinate her three boys despite the law.

She lives in Suffolk County, a county with the highest number of children who previously held religious exemptions in the state, nearly 3,000, according to an analysis of the state of 2017/2018 enrollment and vaccination records.

For all of those students, Tuesday marked the final day the district would allow them to attend school without proof of vaccination.

"As required, Rocky Point Union Free School District is adhering to the mandated New York State Education Department's immunization law. We have been in communication with parents of students who have not met this requirement and have a plan in place for when the law goes into effect; for our district, it is Wednesday, Sept. 18, 2019. As this is a matter pertaining to student privacy, the details of our plan will not be shared as we treat this matter with respect and discretion," said Superintendent Scott O'Brien in a statement.

A spokesperson for the New York State Department of Health added, "Schools are required to exclude students who are not in compliance with the law," and added that schools found in violation could face $2,000 fine per violation.

"It's extremely upsetting," Orofino said, adding that she plans to take her kids to school and challenge the mandate.

Other parents have said they've considered homeschooling their children or leaving the state.

"I'm going to sit and wait and let the state figure it out," Orofino said. "They created this problem, and they're going to have to figure it out."

Most of the country, including New Jersey and Connecticut, allow parents to skip vaccinations for their children based on their beliefs.

This June, New York became the fifth state to eliminate exemptions for anything other than a medical necessity. California, Maine, Mississippi, and West Virginia have passed similar laws.

Legislators passed the New York law in response to the worst measles outbreak in the US in over 25 years.

Of the more 1,241 cases in 31 states confirmed by the Centers for Disease Control as of September 2019, roughly 83% have been in New York, predominantly in areas with lower rates of immunization, such as communities in Rockland County and Brooklyn.

"Measles is very, very contagious," said Dr. Robert Posada, a pediatric specialist in infectious diseases at Mount Sinai. "It doesn't take a lot of people not vaccinating their children, and then the whole community is at risk."

The New York law is facing a challenge in the state Supreme Court but a judge in Albany ruled in August that the law could take effect while the case continues in court.

In that decision acting Justice of the NY Supreme Court Denise Hartman wrote, "Protecting public health... is unquestionably a compelling state interest... "In conclusion, given the long line of cases upholding the exercise of the State's police power to require children to be vaccinated before they may attend public and private schools, the Court does not, at this early stage of the litigation, see a path for plaintiffs to succeed on the merits."

A federal judge has already rejected a similar challenge.

DO YOU NEED A STORY INVESTIGATED? Danielle Leigh and the 7 On Your Side Investigates team at Eyewitness News want to hear from you! Call our confidential tip line 1-877-TIP-NEWS (847-6397) or fill out the form BELOW. You can also contact and Danielle directly: Danielle Leigh Email your questions, issues, or story ideas to 7OnYourSideDanielle@abc.com Facebook: DanielleLeighJournalist Twttier: @DanielleNLeigh
Report a correction or typo
Related topics:
health & fitnesssuffolk countyvaccinesreligion7 on your side investigationmeasles
Copyright © 2021 WABC-TV. All Rights Reserved.
7 ON YOUR SIDE INVESTIGATION