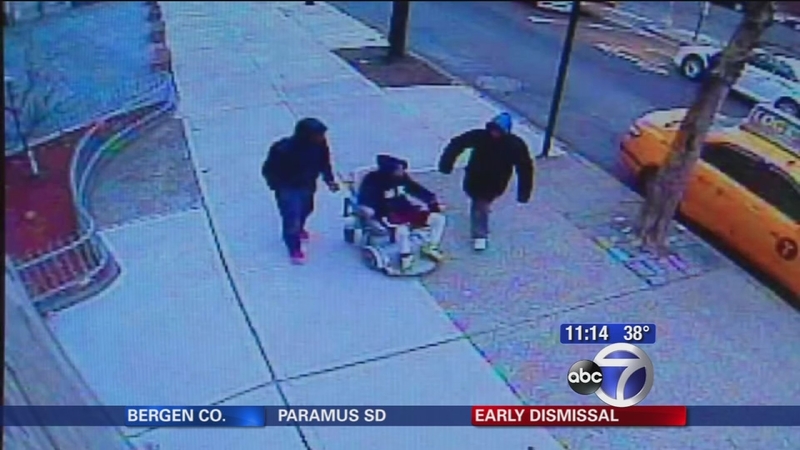 HIGHBRIDGE (WABC) -- New surveillance video shows a man riding a motorized scooter down the street in the Bronx.

That's the getaway, it's not his scooter.

The woman who owns the scooter is without her main mode of transportation and insurance is not rushing in to get her a new one.

"Now, If my child showed to my house with a wheelchair, I would take them right back to where they got it from, you understand, and I would scare the heck out of them," said Virginia Velez, a Highbridge resident.

But that didn't happen with the parents of these teens spotted taking a joy ride in the motorized chair that belongs to 70-year-old Virginia Velez.

"I don't think they would take a wheelchair for a joyride, how about a bicycle, a car, but not a wheelchair, people need that," Velez said.

It was January 14th and Velez did what she always does.

"I've lived here so many years and everybody knows my chair. Seven years, my God!" Velez said.

She parked it in front of her salon during a hair appointment on Shakespeare Avenue in the Highbridge section of the Bronx. When she came out, the chair was nowhere to be found.

"From what I can tell from the cameras they pushed the chair for a little bit all the way down the street towards the northern side," said Father Joseph Franco, of Sacred Heart Church.

While the thieves took off with Velez's chair from in front of the hair salon, little did they know that her church is right across the street, and got a clear shot of all three suspects.

"When Father Franco told me you know Virginia I got them, I said, 'You know Jesus you are so good,'" Velez said.

Velez is now borrowing a wheelchair, as she fights with her insurance company to replace the $5,000 one that was stolen.

"They took my independence," Velez said.