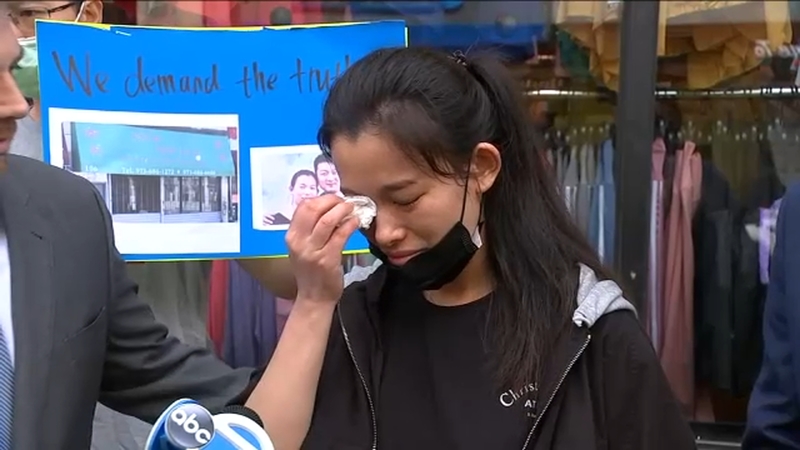 PATERSON, New Jersey (WABC) -- The grieving family of a hit-and-run victim that was killed in Paterson, is now urging New Jersey's attorney general to get involved in the case.

It was over two weeks ago when at the intersection of Main Street and Market Street in downtown Paterson, that 40-year-old Junting Pan was struck and killed when police say 31-year-old Harold Rasbin of Orlando, veered out of control behind the wheel of the stolen SUV.
EMBED More News Videos

One person died and several others were injured in a hit-and-run crash in Paterson, New Jersey, on Tuesday.

The victim's family wants to know if a police chase of the suspect led to the death.

"In a little over two weeks, there are still answers that the family is looking for from the city of Paterson," family attorney John Elefterakis said.

Rasbin was arrested on the scene and was later hit with a slew of charges including aggravated manslaughter.

But Haiyan Wei, now a widow, believes there is more accountability that needs to take place.

"When the loss of life like what happened to Jun occurs, because a possible chase was occurring that should have ceased, that's something that we and the family are looking for answers on," Elefterakis said.

Immediately following the crash, that also injured six other people, the city said there was no police pursuit in progress.

"We call on the attorney general's office to also launch their own independent investigation," Elefterakis said.

Pan's family and friends hope an investigation will help their heads make sense of what happened, even though their hearts will never truly heal.

"She would like to have the government of Paterson County fully cooperate with the lawyer's investigations so we're able to prevent a next tragedy in this town in New Jersey," translator and family friend Henry Chen said.