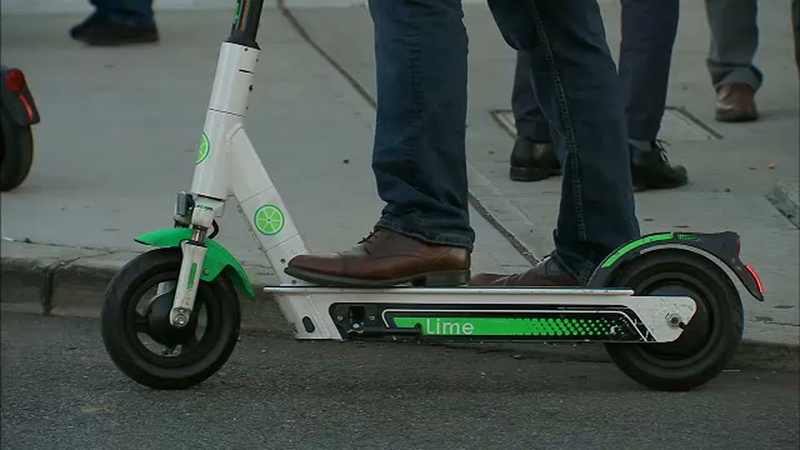 HOBOKEN, New Jersey (WABC) -- The city of Hoboken is responding to the rise in popularity in e-scooters with the hiring of two new enforcement officers.

Two 'Micromobility Code Enforcement Officers' will now be patrolling the streets of Hoboken.

The positions are being funded by a partnership with the e-scooter rental company Lime.

The officers will be responsible for educating riders on the city's e-scooter, electric bicycle and e-skateboard laws and ticketing riders who break them.

The most common violations so far, he says, are underage users, riding the wrong way down one way streets. And the big one - scooters on the sidewalk.

Last month an underage rider on the sidewalk collided with a mother and her stroller.

That ride share company's contract was immediately unplugged by the mayor. But there are still Lime scooters zipping around.

Many residents like the idea of dedicated scooter enforcement officers.
"I think it would be an actual deterrent. For now there really isn't one," one resident said.

"It can't hurt to have people regulating," said another resident.

For now it might be tough to identify one of the officers. They just got fitted for uniforms and they won't get them until next week.

So for now, they'll be carrying badges and business cards.

What happens if an irresponsible rider ignores the officer and just scoots away? There is a number on the scooter that is like a license plate.

The council member says Lime is working with police so it can suspend a rider's account immediately.

"Being able to identify the scooter in particular in the time that the scooter infraction happened will tell you who's on it," said Fischer.

For now there are only two scooter enforcement officers to police the nearly 4,000 rides a day but the city could add more.

"I think maybe we need to quadruple it at a minimum," said one resident.