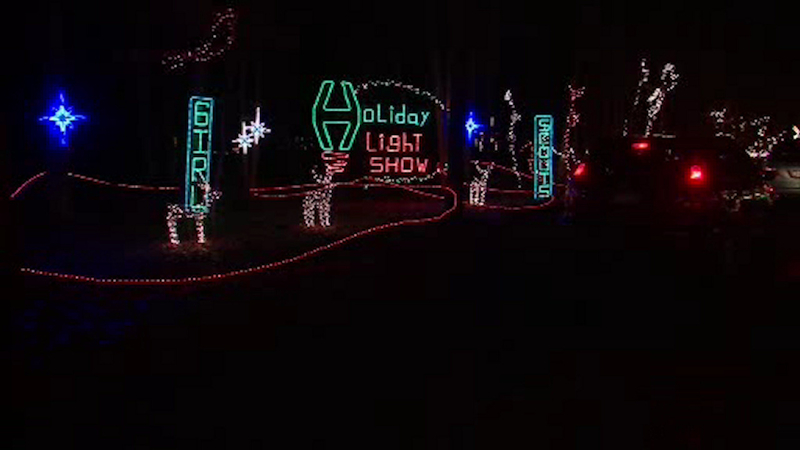 BAYPORT, N.Y. (WABC) -- The spirit of season is not exactly what some folks on Long Island are feeling. The lights in their neighborhood are spectacularly gorgeous, but they're so beautiful that the streets of a Suffolk County hamlet are jammed.

From reindeer, to polar bears, and miniature trains made out of Christmas lights, it's all part of the Girl Scouts of Suffolk County's annual drive-thru Holiday Light Show. It winds through a 1-mile woodland trail in Bayport, on Girl Scouts campgrounds.

A few weeks a year, the massive production lights the night sky and little faces.

"It's great. It really is a wonderful thing that they do," said Stacey Buonconsiglio, a patron.

But the light show isn't putting a smile on everyone's faces.

It takes place at the end of a residential street and neighbors there say this light show has got to go.

"You are trapped. You never know what the situation is going to be. You can't invite people over. It's almost like a running joke; oh I can't go down your block because I don't know if I can get off it," said Michelle Azzone, a resident.

Residents shared a video they say they shot last year, showing traffic backed up all the way down their dead-end street.

In it you can hear a first responder.

"There's nowhere for these cars to go," the first responder said.

"I call 911, how long is it going to take them to get to my house? Am I going to die in the process because there's 3,000 some odd cars and they can't get through?" said Suzanne Richon, a resident.

The concerns have even forced local lawmakers to step in.

"We've tried to work along with the community and the Girl Scouts to find an alternative site. Although I support the Girl Scouts and want to help them be as successful as possible, I don't think that success should come at detriment of any single community," said Legislator William Lindsay, (D) Suffolk County.

But the Girl Scouts say they've taken steps to mitigate the traffic and increase public safety, including having its plan approved by local police and emergency services, and hiring onsite private security.

Christine Terzella is with the Girls Scouts, she says the light show is a fundraiser, and it's one they need to operate.

"It would unfortunately adversely affect the way we can serve our girls. We wouldn't really have the funds to bring them the program's we need to bring to them," Terzella said.

Some residents say the traffic was much worse, but last year the Girl Scouts introduced timed ticketing which caps the number of cars per 15-minute window.

Meanwhile this year, residents starting using placards that show they live there, because in the past they've gotten into fist fights with motorists who thought they were trying to cut the line.