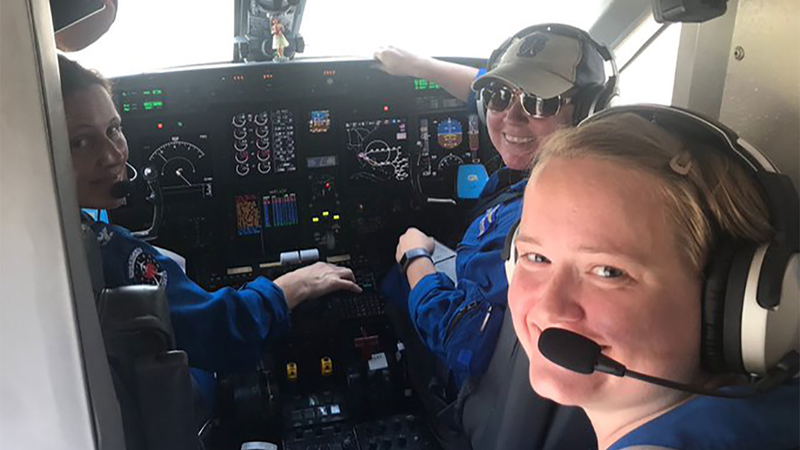 LAKELAND, Fla. -- Reconnaissance missions are an important part of storm preparation as a hurricane approaches, but one recent NOAA reconnaissance flight made history.

The Lakeland-based NOAA Aircraft Operations Center said Thursday that it had flown its first recon mission with an all-female, three-pilot flight crew ahead of Hurricane Dorian. It was staffed by Capt. Kristie Twining, Cmdr. Rebecca Waddington and Lt. Lindsey Norman.

The trio flew aboard NOAA's Gulfstream IV jet, nicknamed "Gonzo," which has flown around almost every Atlantic hurricane that has threatened the United States for more than two decades.

A Gonzo mission spans thousands of square miles, according to NOAA, and gathers "vital high-altitude data with GPS dropwindsondes and tail Doppler radar that enables forecasters to maps the steering currents that influence the movement of hurricanes." In addition to hurricanes, the plane is also used to study winter storms.

The National Hurricane Center said Friday that the Category 2 storm is expected to strengthen into a potentially catastrophic Category 4 with winds of almost 140 mph and slam the coast late Monday or early Tuesday - nearly 10 mph faster and a day later than previously forecast, as Dorian's forward motion began to slow.

Trump declared a state of emergency in Florida and authorized the Federal Emergency Management Agency to coordinate disaster-relief efforts.

The hurricane center's projected track showed the storm hitting around Palm Beach County, the site of Mar-a-Lago. But predicting its course with any confidence this far out is difficult, and forecasters cautioned that all of Florida, including Miami, Fort Lauderdale and Orlando, could be in harm's way.

Forecasters warned, too, that the storm's slow movement could subject the state to a drawn-out pummeling from wind, storm surge and heavy rain.