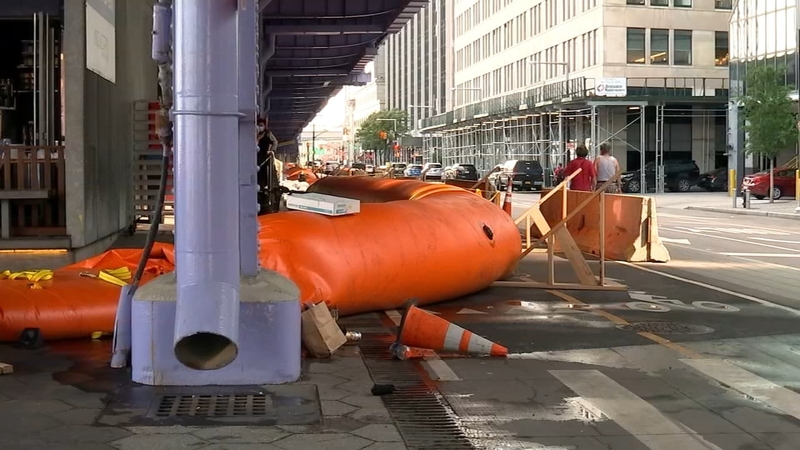 "I have directed our State agencies to deploy emergency assets to problematic areas to assist our local partners, and I am asking New Yorkers to be diligent and stay ready in case the storm intensifies on Tuesday," the Governor said.

Meanwhile, restaurants, already struggling to stay open during COVID are desperate that the city's storm surge plan will keep them afloat.

Mark Joseph Steakhouse survived September 11 and Superstorm Sandy, and has been limping through COVID.

"By the time we're done tonight, we should have one seamless barrier," said NYC OEM Deanne Criswell.

In the near decade since Superstorm Sandy, there is still no permanent protection for the South Street Seaport. The city instead is relying on what they call 'tiger dams,' which workers fill up with thousands of gallons of water to block a rising river.

The Seaport area was hit with about 4 feet of storm surge during Sandy. The storm is the latest crisis in a region already grappling with the lingering effects of the coronavirus pandemic, including a summer of social distancing and uncertainty about school in the fall, and weeks of sometimes fitful protests over police misconduct.

RELATED: Tri-State prepares for Isaias - what you need to know

"I want to encourage all New Yorkers take this storm seriously," Mayor de Blasio said at a waterfront news briefing Monday. "Please take precautions. Please look out for your neighbors. If anyone needs help, make sure you're there for them because this is the kind of thing that comes on fast and people need to be ready."

Underground, armies of transit workers have been at it all night, racing to clear drains in the heart of the subway system, They have also installed a network of storm doors they can close to prevent scenes like this when the swollen harbor swallowed up Battery Park. From there, to the once-ravaged Rockaways, Sandy's impact is always top of mind.

The Tri-State Area has seen a lot of bad weather since sandy, and Tuesday should not be nearly as bad. However, still for the Mark Joseph Steakhouse, it means at least another day with no business. They are required, like all restaurants to dismantle those elaborate outdoor dining platforms to keep the wind from blowing them away.

While people are being urged to not travel, officials released travel safety tips if they must go outside.

DO NOT attempt to drive over a flooded road. Turn around and go another way.
DO NOT underestimate the destructive power of fast-moving water. Two feet of fast-moving flood water will float your car. Water moving at two miles per hour can sweep cars off a road or bridge.
Leave early to avoid being marooned on flooded roads.
Follow recommended routes. DO NOT ignore emergency detours to view flooded areas.
As you travel, monitor NOAA Weather Radio and local radio broadcasts for the latest information.

Watch for washed-out roads, earth-slides, broken water or sewer mains, loose or downed electrical wires, and falling or fallen objects.
Watch for areas where rivers or streams may suddenly rise and flood, such as highway dips, bridges, and low areas.
If you are in your car and water begins to rise rapidly around you, abandon the vehicle immediately.

The heaviest rain in the city is expected from noon to 2 p.m. All city beaches will be closed to swimming, though surfing will be allowed in some areas. No lifeguards will be on duty, but parks department staff will be patrolling the coastline for scofflaw swimmers, Parks Commissioner Mitchell Silver said. Metro-North will operate its commuter trains on a weekend schedule Tuesday with hourly service on most lines, the Metropolitan Transportation Authority said.

Trains will run every two hours on the northern end of the Harlem Line in New York and every three hours on the Danbury branch in Connecticut. Tandem trailers and empty tractor trailers will be banned from most bridges in the city from noon to midnight Tuesday and speed restrictions could be put in place on the George Washington Bridge and Staten Island crossings, officials said. Subways and buses will continue to run, but some system maintenance could be suspended. In preparing for the storm, the city sent crews to clear catch basins in flood-prone areas over the weekend and will have teams positioned during the storm to quickly respond to problems, Emergency Management Commissioner Deanne Criswell said. "That's something that we actually didn't do during Sandy," she said. "I think it'll make a big impact on how we respond here."