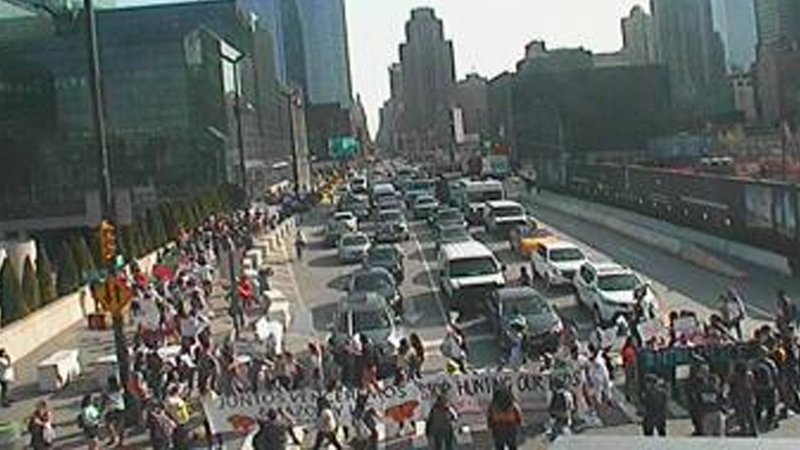 MANHATTAN (WABC) -- Hundreds of protesters blocked traffic and interrupted an annual conference of a division of Amazon Thursday morning, over Amazon's alleged connection to the ongoing debate over immigration.

The protest began before 9 a.m. as demonstrators briefly shut down 11th Avenue at 34th Street near the Javits Center.

The center is hosting the annual conference of Amazon Web Services (AWS), which is devoted to cloud computing systems for people, businesses and the government.

After blocking traffic outside, more than two dozen protesters made their way inside.

They were eventually escorted out of the presentation, but dozens more protesters remained outside the building.

Groups including Make the Road NY and New York Communities for Change claim Amazon's data collection and cloud services are being used to help the White House in its crackdown on immigrants.

They want AWS to drop its contracts with Palantir Technologies and other companies the protesters say provide technology services to Immigration and Customs Enforcement (ICE) and to the Department of Homeland Security,

The protest comes on the same day that President Trump was making big headlines on his one of his signature issues.

He is vowing to use executive action to include a citizenship question on the 2020 census. In addition, ICE raids against illegal immigrants are reportedly set to begin on Sunday after weeks of Twitter threats and delays.

Both actions have immigrant communities on edge across the country, along with recent reports on deplorable conditions inside several detention centers along the southern border.

Protesters at the Javits Center said they are trying to raise awareness about Amazon's connections to the larger political climate right now.

Eyewitness News has reached out to Amazon's media relations team for comment but had not heard back as of noon.

According to published reports, Vogel did say after the protesters were removed, "I'm more than willing to have a conversation, but maybe they should let me finish first."