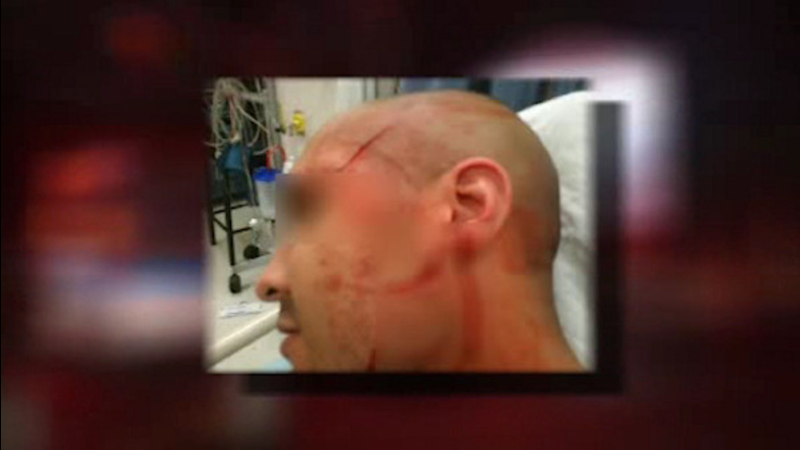 NEW YORK (WABC) -- A Rikers Island corrections officer is recovering after he was slashed by inmates and required 22 stitches, and two teenagers charged in the attack appeared in court Friday.

Two suspects, identified as 19-year-old Darnell Green and 18-year-old William Whitfield, allegedly distracted Officer Ray Calderon and put him in a chokehold, then slashed his face, head and arms.

The pair, who face multiple charges of assault in the incident, did not enter pleas and were ordered held on $500,000 bail each at their arraignment in Bronx Criminal Court. Calderon was present and said he is OK after being taken to a local hospital for treatment after the incident.

An attorney for Whitfield, who is being held at Rikers on an attempted murder charge, said his client was presumed innocent and planned to contest the charges. Green is being detained at Rikers in a murder case.

On Friday, all New York Department of Correction facilities were on lockdown while officers searched for contraband.

According to court papers, Green approached Calderon from behind and wrapped both arms around his neck, choking him as Whitfield advanced with a sharp object. Calderon then kicked Whitfield, fell to the ground with Green and was slashed on the left side of his face along his forehead, cheek and ear, as well as his right wrist.

Green was accused in three prior attacks in March on corrections officers, including punching a female guard in the face. In a 2012 court appearance, sources said, he attacked three court officers. Sources said Whitfield has seven prior arrests, all felonies.

Two other men who were involved didn't appear in court Friday, as sources said their roles in the attack still are being determined. They may have been decoys or part of a diversion, but did not actually slash the guard. Sources told Eyewitness News the inmates would have been in solitary confinement based on their records, but the commissioner got rid of solitary for adolescents.

Norman Seabrook, the president of the Correction Officers' Benevolent Association, released a statement saying, "On the eve of the release of new 'use of force' guidelines from the Department of Correction, which we were not consulted on, one of our members is laying in a hospital bleeding from multiple slash wounds to his head and face. Our members face life and death danger every single day when they walk into work, and incidents like this are exactly why we need to be a part of these policy discussions. It is an outrage that the lives and safety of brave Correction Officers like this young man do not seem to be a priority."

Exactly what type of sharp object was used in the attack wasn't immediately clear, and officials said investigators are examining how the inmates obtained it.

"Attacks against the hardworking men and women who serve in our department are unacceptable and will not be tolerated," jails commissioner Joe Ponte said in a statement.