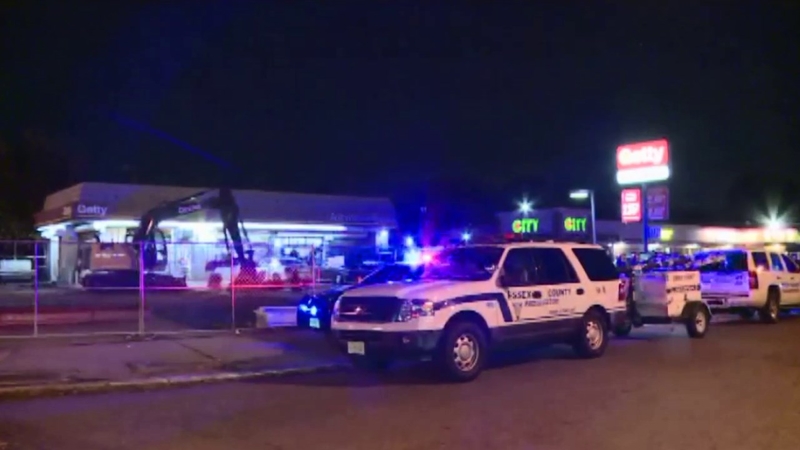 NEWARK, N.J. (WABC) -- A reward is now being offered after a shooting in northern New Jersey left a store clerk dead.

Police say 57-year-old Ashvin Patel, of Edison, was found suffering from a gunshot wound around 8 p.m. on Monday, October 26, in the convenience store of a Getty Gas Station on Stuyvesant Avenue in Irvington.

He was working in the store when prosecutors say two men wearing masks entered the store with guns and announced a robbery. Essex County Prosecutor's Office Chief of Detectives Anthony Ambrose said Patel was taken to University Hospital in Newark, where he was pronounced dead.

"From the beginning, I'm here 9 years, that's how much I know him," station owner Raj Seepersad said. "He was like a father to me."

Seepersad was in the auto shop at the time, just yards away when the gunman killed his friend.

"I was working late," he said. "We heard a gunshot, we stopped. A couple of seconds later, we heard two more, then I heard screaming. So when I came, he was on the floor already, and I didn't see nobody."

Investigators have gathered video recordings from several stores in the area, because minutes before Patel was killed, two masked men robbed a restaurant right across the street, pushing through a door to get behind the counter.

"They got through the counter with twp guns," restaurant owner Omar Kamel said. "A lady was working here. They asked her to put the money in a bag, asked where the safe was. We don't have one, so they took the money and their cell phones."

Kamel said the two men tried but failed to break into the phone store next door. After that, they heard gunfire.

"They tried to get as much as they could in this same area, so when they ran across the street, the lady here says she heard a gun shooting," he said. "Four shots."

Patel was a father and a longtime clerk at the shop, where candles now stand in his memory. His funeral arrangements are posted for customers, many of them friends who cared about him.

"He was a nice person to everybody in the area," one customer said. "A lot of people come saying sympathy. Even when he was alive, people would say the same thing, you know."

CrimeStoppers is offering up to $10,000 for information leading to an arrest and conviction.