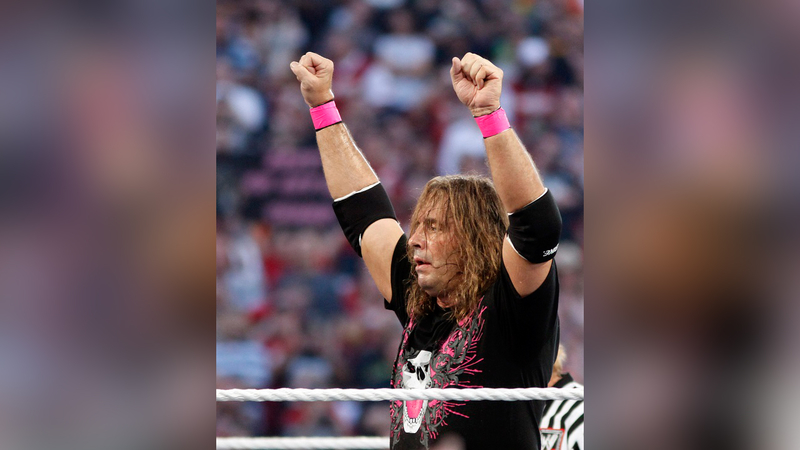 BROOKLYN (WABC) -- It looked like it was part of the show, but police say an attack on a famous wrestler while he was giving a speech during the WWE Hall of Fame ceremony on Saturday at the Barclays Center was not staged.

A man seemed to come out of nowhere, and tackled 61-year-old wrestler Bret 'The Hitman' Hart - in front of a stunned audience.

Someone from the crowd just ran into the ring and tackled Bret Hart during his WWE Hall of Fame speech. Here’s the aftermath. pic.twitter.com/oZXjnUj2kp

The person ran toward the ring from the crowd, spectator Alan Fisher told The Associated Press.

"I couldn't believe that the security had missed him in the first place and the next thing you know there was Shane McMahon and Travis Brown on top of him the crowd was going crazy booing," Fisher said. "Everyone was cheering when one of the wrestlers punched him."

26-year-old Zachary Madsen was quickly subdued by several people who came to Hart's defense. He is now in custody and faces assault and criminal trespass charges.

The induction event resumed after the fan was taken into custody.

"An over-exuberant fan surpassed our security at ringside and made his way briefly into the ring," WWE later said in a statement. "The individual has been turned over to the proper authorities."

Hart released the following statement on Monday.
"What a wild weekend to say the least! First of all I want to thank WWE for not only the Hall of Fame honor for myself and Jim "The Anvil" Neidhart, but for their hospitality with my family and friends. Regarding the ceremony, firstly I want to let everyone know that I am okay and was not injured. If there's one thing I want everyone to take away from the Hall of Fame ceremony is not so much what happened, but how I wasn't going to let anything stop me from completing my tribute to my best friend and our team. I'm also glad I got to join @natbynature and @thebethphoenix for their WrestleMania moment. Thank you everyone for your kind thoughts and words."