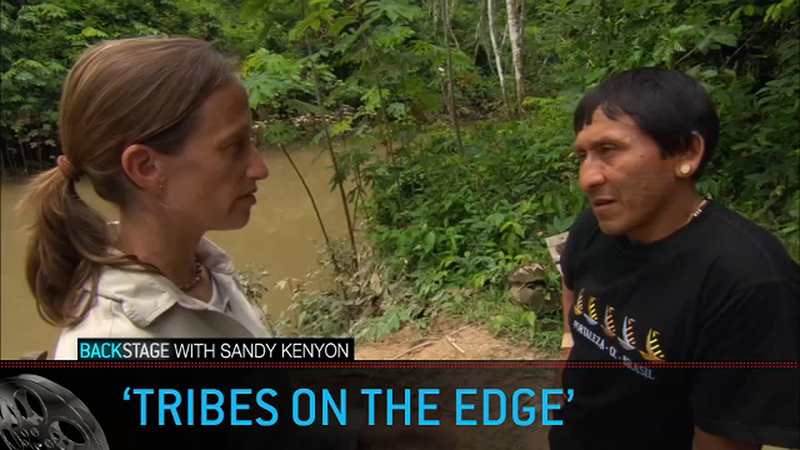 NEW YORK (WABC) -- The people who live in a section of the Amazon rainforest are facing extinction and fighting for their survival as the full force of the 21st Century reaches their doorstep and threatens their way of life, and the granddaughter of a famed explorer is using her craft to aid their cause.

"I believe growing up in a family like this, nature is just an extension of self," Celine Cousteau said.

Cousteau first came to the Amazon at the age of 9 with her grandfather, the legendary Jacques Cousteau. And today, she continues his legacy with her new documentary, Tribes on the Edge.

"I started out going to the Amazon in 2006, and when I was down there in 2007, I met the tribes of the Javari territory in Brazil," she said. "(I) learned about their very high rates of hepatitis, learned about all the illegal activities that were encroaching on their land, the pressure of their government to extract natural resources, therefore wanting to change the laws that protect this territory. It really motivated me to want to do something more, and that 'something more' came at their request. And they said, 'We want you to tell our story to the world."

The roots of the crisis lie in the greed of outsiders who seek to exploit the abundant natural resources, especially timber and gold.

"The land is ours, but the government doesn't give us any support," a tribesman said. "A lot of fish and wood is being stolen from indigenous land. The way that illegal logging is going, the forest could be gone."

Cousteau made "Tribes On The Edge" with help from a foundation started by Nell Newman, daughter of the late Paul Newman.

"The problems come in not just in the detrement of the ecosystem, but also in harm of indiginous people," she said. "And considering that we get 20 percent of our oxygen from the Amazon rainforest, having indigiounous tribes as caretakers and guardians serves all of us."

She insists she was never expected to follow in anyone's footsteps -- that just came naturally to her.

"I think when you care about something so much and you protect it, you can't help but be fed by it, and you need it," she said. "I mean, I get to wake up in the morning understanding that I have a purpose, and that's a huge privilege."

She has also launched a Kickstarter campaign to help her finish the film.