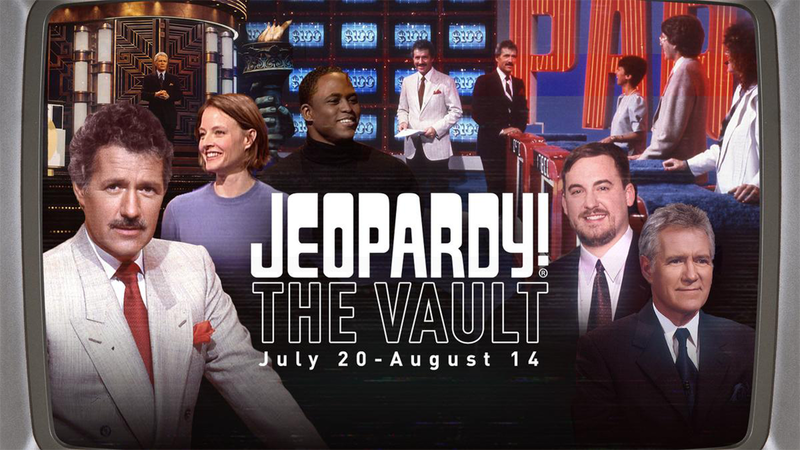 "Jeopardy!" is opening up its vault for a four-week retrospective series that started July 20.

For the first time, "America's Favorite Quiz Show," will dig deep into its archives to highlight memorable contestants, exciting moments, and unique tournaments from the show's 36-year history, including the series premiere, which aired September 10, 1984.

"What is incredible about "Jeopardy!" is that it has historical importance while remaining culturally relevant today," said the show's executive producer, Mike Richards. "I know our fans will love the nostalgia while still enjoying the gameplay. A lot has changed over the years - the set, the pace of the game...the mustache! - but the ability to play along is timeless."

The producers combed through nearly 8,000 episodes and have chosen 20 of the most compelling shows in the series' history, many of which have not been seen since their first airing.

The complete schedule is as follows.

This week features five of the best and most exciting shows from the 1980s, including the series premiere, the first "super-champion," the first record-setting contestant, and more.

On Wednesday, the week features the very first "Super Champion" on Jeopardy!, fan favorite Chuck Forrest, a law student from Michigan, who broke every existing record when he appeared during the show's second season. Those records stood until three years later, when New York City transit cop Frank Spangenberg appeared, shattering Chuck's records. See Spangenberg win his fifth and record-breaking show, as well as his victorious return in the show's Tenth Anniversary Tournament. Altogether, this makes for an exciting week of Jeopardy! Episodes.

Throughout the years, JEOPARDY! has invited celebrities to play for their favorite charities, and more than $9 million has been won for great causes. This week features five of the most entertaining celebrity games ever.

For its first-ever million-dollar competition, 15 of the best contestants from the first 18 seasons of the show competed in a two-week contest taped at Radio City Music Hall in New York City.