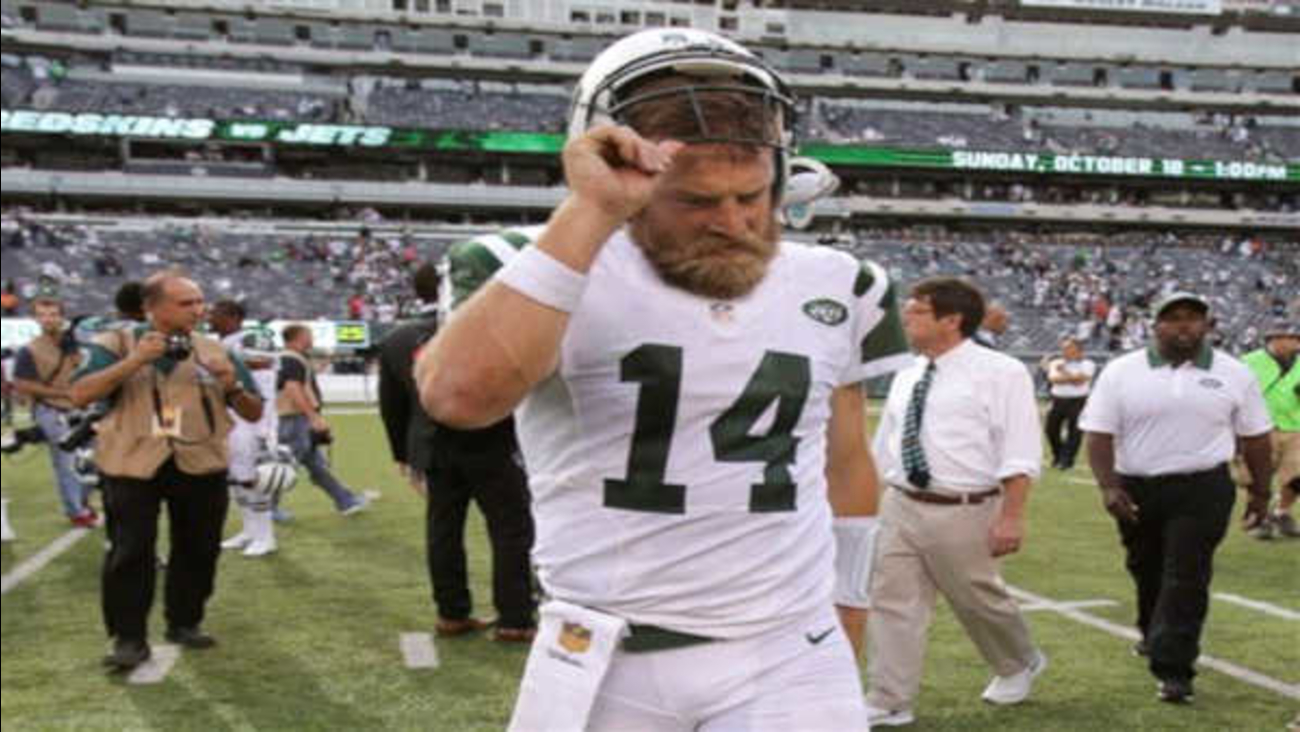 EAST RUTHERFORD -- Brandon Marshall made a big catch and was determined to do something more.

After all, the New York Jets' offense was struggling and in dire need of a spark. So, Marshall carelessly tossed the ball behind him for a teammate - and flipped the momentum right back to the Philadelphia Eagles.

"Wrong time to gamble," Marshall said after the Jets' 24-17 loss Sunday. "I was pressing, trying to make a play. Probably the worst play in NFL history."

Darren Sproles sparked the Eagles (1-2) with an 89-yard punt return for a score and added a 1-yard touchdown run, the defense caused four turnovers and Philadelphia got its first win of the season.

"Now we know we're not going to go undefeated this year," said quarterback Ryan Fitzpatrick, who was intercepted three times.

Sam Bradford threw a TD pass to Ryan Mathews, who also rushed for 108 yards on 25 carries while starting in place of the injured DeMarco Murray. The Eagles improved to 10-0 all-time against the Jets, who were coming off a victory at Indianapolis last Monday night.

"They beat us at our own game," said Jets coach Todd Bowles, whose team had 10 takeaways in the first two games and only one in this one.

With the Jets trailing 17-0, Marshall caught a 15-yard pass - and then tried to get off a backward pass to Jeff Cumberland. But the ball hit an Eagles defender and was recovered by Jordan Hicks. A video review confirmed the call, and the Eagles made the Jets pay.

Sproles scored moments later, running straight ahead for a 1-yard TD that gave Philadelphia a 24-0 lead with 2:11 remaining in the half.

"You can't do that," Marshall said of his play. "The damage outweighs the reward so much."

Fitzpatrick threw touchdown passes to Marshall and Jeremy Kerley, but the last of his three INTs, by Walter Thurmond with 3:28 left, helped seal the Jets' loss after they held the Eagles scoreless after halftime.

Nick Folk kicked a 53-yard field goal with 2:34 remaining, but Seyi Ajirotutu recovered the onside kick and the Eagles ran out the clock.

"I feel like the first couple of weeks, there was a lot of pressure on us," Bradford said. "I feel like we were all pressing a little bit. It's just nice to get that first one. Now that pressure's gone."

Kerley, who had been dropped on the depth chart and played just two total snaps on offense entering the game, caught a 7-yard pass from Fitzpatrick to get the Jets within 24-14 with 9:37 remaining.

The Jets appeared ready to turn the momentum in their favor when David Harris popped the ball out of Mathews' hands and Demario Davis recovered. But three plays later, Philadelphia took it right back when Brandon Bair deflected Fitzpatrick's pass intended for Marshall and Hicks grabbed the easy interception.

Marshall finished with 10 catches for 109 yards and reached 10,000 yards receiving for his career.

Sproles put the Eagles up 10-0 with his spectacular punt return early in the second quarter, dodging at least four would-be Jets tacklers.

"We just didn't make any plays," Bowles said. "They made plays and we didn't. We didn't make many in the second half, either."

NOTES: Murray was out with a hamstring injury, while the Jets played without running back Chris Ivory (quadriceps), who was active but didn't play, and wide receiver Eric Decker (sprained knee). ... Jets QB Geno Smith was active as Fitzpatrick's backup for the first time this season after having his jaw broken by a punch from then-teammate Ikemefuna Enemkpali on Aug. 11. ... Jets CB Darrelle Revis, who was questionable with a groin injury, tweaked a hamstring. Bowles had no immediate word on him or RG Willie Colon, who left after halftime with a knee injury. ... Jets rookie Devin Smith had three catches for 39 yards in his NFL debut.
Related topics:
sportsnflnew york jets
Copyright © 2022 by The Associated Press. All Rights Reserved.
TOP STORIES
Rallies held in NYC after Supreme Courts overturns Roe v Wade
Supreme Court overturns Roe in landmark case on abortion rights
Brian Laundrie's notebook revealed: 'I ended her life'
3 people found dead inside Queens home
Companies willing to cover travel costs for those getting an abortion
NYC Pride weekend celebration turns into rally cry
Tri-State reacts to Supreme Court overturning Roe v. Wade
Show More
What does Supreme Court abortion ruling mean for NY, NJ, and CT
Police find suspicious device with chemicals, BB pellets at LI school
Congress sends landmark gun violence compromise to Biden
Biden vows to 'do all in my power' to protect abortion access
Juul can keep selling e-cigarettes as court blocks FDA ban
More TOP STORIES News