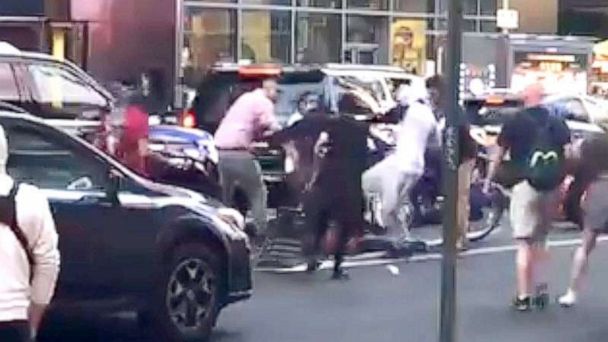 A 29-year-old Jewish man was beaten by a group of people in New York City's Times Square on Thursday evening, police said.

The victim was treated for minor injuries at a local hospital and released. The incident is now being investigated as a hate crime, according to the New York City Police Department.

One suspect -- 23-year-old Waseem Awawdeh of Brooklyn -- was taken into custody in Midtown Manhattan on Thursday night, police told ABC News. He was charged with assault as a hate crime, gang assault, menacing, aggravated harassment as a hate crime and criminal possession of a weapon. The latter charge refers to crutches that Awawdeh allegedly used to beat the victim, according to police.

Detectives are searching for as many as six more suspects in connection with the incident, police sources told ABC News.

The victim is a resident of Nassau County on Long Island, according to Nassau County executive Laura Curran, who said she was "appalled" by the attack.

"We stand with our Jewish brothers and sisters and against vile anti-Semitism that will never find comfort in our communities," Curran said in a statement Friday. "I have asked the Nassau County Police to continue to communicate with synagogues and yeshivas, as well as other houses of worship, to ensure all of our residents are protected."

New York Gov. Andrew Cuomo announced he is directing the New York State Police Hate Crimes Task Force to offer assistance in the investigations of such attacks, saying, "justice needs to be done."

"I unequivocally condemn these brutal attacks on visibly Jewish New Yorkers and we will not tolerate anti-Semitic violent gang harassment and intimidation," Cuomo said in a statement Friday. "New York is the vibrant and dynamic home for people from around the world. This tapestry makes New York the extraordinary place that it is. Those of all faiths, backgrounds and ethnicities must be able to walk the streets safely and free from harassment and violence."

The incident occurred amid dueling demonstrations over the deadly conflict between Israel and Hamas, the Palestinian militant group ruling the Gaza Strip. Pro-Israel and pro-Palestine protesters both took to the streets of Midtown Manhattan on Thursday evening, as a mutual cease-fire went into effect. At times, the two groups collided and fights broke out.

At least 26 people -- 25 men and one woman -- were arrested during the protests Thursday on various charges, including obstructing governmental administration, resisting arrest, unlawful assembly, disorderly conduct and criminal possession of a weapon, according to police. Seventeen summonses and seven desk appearance tickets were issued. One of the arrested will be arraigned in criminal court in lower Manhattan on Friday, police said.

A video taken by a bystander and later posted on social media purportedly shows the assault on the Jewish man. A man is seen lying in the middle of the street, blocking traffic, as a group of people, some holding protest signs, punch and kick him. One person in the group is seen beating him with crutches.

Police sources told ABC News that the victim was wearing a yarmulke, a traditional Jewish head covering that's also called a kippa, and was on his way to a pro-Israel protest when he was jumped by the group, who pepper-sprayed him. Some of the assailants made anti-Semitic statements while beating him, according to the sources.

Speaking to WNYC radio station on Friday, New York City Mayor Bill de Blasio called the attack "absolutely disgusting and unacceptable." He said police have "reinforced" synagogues, the Museum of Jewish Heritage and other Jewish sites throughout the city.

"We had a man viciously beaten, simply because he appeared to some individuals to be Jewish," de Blasio told WYNC.

De Blasio said there were also incidents of protesters throwing fireworks, injuring at least one person.

"This is unacceptable," he added. "We have arrests already and more coming."

The truce between Hamas and the Israeli military came after an 11-day battle of trading rockets and airstrikes that left hundreds of people dead -- mostly Palestinians -- and devastated the already impoverished communities in the blockaded Gaza Strip.