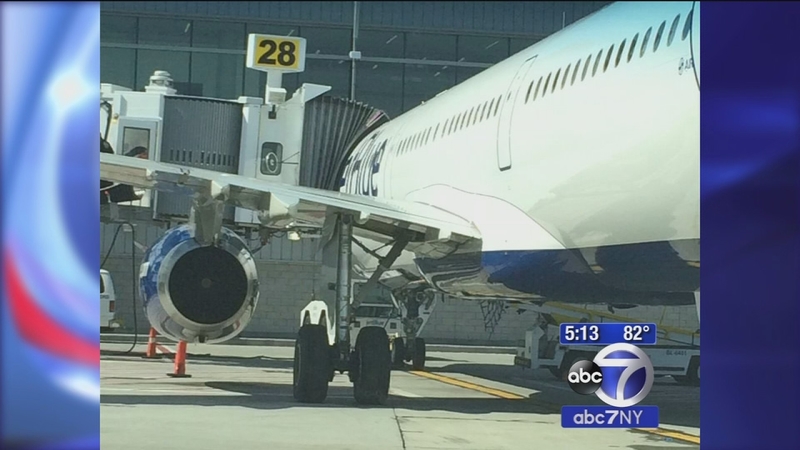 Man slashed with razor, suspect pepper-sprayed by passenger while deplaning at JFK

QUEENS (WABC) -- Police say six people were injured and two are in custody after a slashing on a plane at John F. Kennedy International Airport Wednesday morning.

The incident happened on JetBlue Flight 960 from Kingston, Jamaica, which arrived at Terminal 5 Gate 28 just before 9 a.m.

A male passenger observed the altercation and attempted to intervene, and the suspect then slashed him in the arm with an eyebrow razor. He suffered a minor scratch to the right elbow.

It was at this point that the female passenger in the middle seat reached into her pocketbook and retrieved a small can of pepper spray, which she sprayed on the suspect. As a result of the spraying of the noxious substance, the pilot elected to open the cabin door, and the female was escorted off the aircraft.

Port Authority police responded and subsequently detained the two women and the man. All other passengers were interviewed for potential witnesses in the Customs baggage area. Flight crew personnel were also interviewed.

Four other passengers were hurt during the fracas, though none of the injuries were serious.

Ballentine is charged with assault and criminal possession of a weapon.

The 52-year-old from New Jersey who had the pepper spray, identified as Linden resident Mary Cannady, is charged with unlawful possession of tear gas, which is a desk appearance ticket.

The man who was slashed on the arm was transported to Jamaica Medical Center. The other five passengers were treated at the scene.