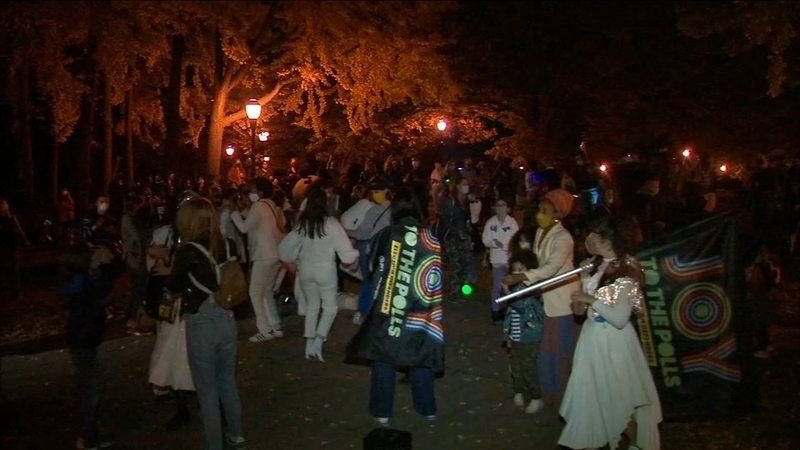 NEW YORK CITY (WABC) -- New Yorkers made their voices heard Friday, as support for their presidential candidate has grown along with each counted ballot.

Across the city on Friday night there was dancing, singing and parading through the streets.

The mood was lighter than the protests of the past few months and the violent arrests this week.

Derick Waller reports on the protests and incidents leading to arrests.

On Friday night, the joy was overflowing.

"We've been waiting four years for this and how sweet it is! To taste the fruits of victory," XX said.

Of course, there has been no official victory yet, but the celebration had already begun.

In Fort Greene, the site of angry and violent protests in recent months, tonight there was a party.

"We will be out here on the streets dancing, singing, protesting, marching to make sure that every vote is counted to make sure democracy lives and thrives in this country," organizer Paola Mendoza said.

In the village, a raucous crowd swerved through residential blocks where more than four in five people voted for Joe Biden.

A city fraught with tension, started to exhale.

"That's a great thing to celebrate to dance about, the fact that people can vote and their voices can be heard," XX said. "And how privileged we are to live in a place that lets everyone have a voice."

However, on Long Island, a much different voice could be heard.
EMBED More News Videos

If the presidential election had been held on Long Island, President Donald Trump would have won re-election -- and residents there know it.

Residents there believe that if the presidential election had been held on Long Island, President Donald Trump would have won re-election.

"I don't like it all," said Bob Ciota, of Nesconset. "I think it was stolen from Trump. Fake news, fake polls, fake election."

His supporters on Long Island have been vocal throughout the past few months, organizing large caravans.

More rallies are planned for this weekend.