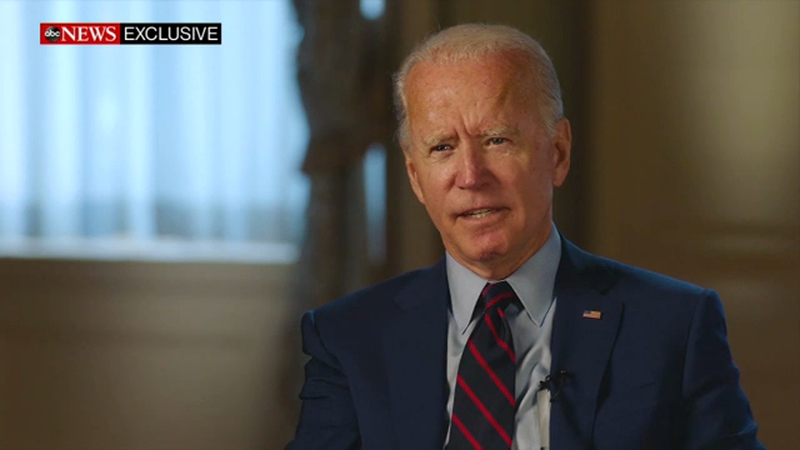 ATLANTA -- Democratic presidential nominee Joe Biden said he would follow public health advisers' advice if they called for a national shutdown should he take office and the coronavirus had not abated.

"I would be prepared to do whatever it takes to save lives. We cannot get the country moving until we control the virus," Biden said in an interview broadcast Sunday night on ABC News.

Asked specifically whether he'd push to shutter economic activity if scientists said it was necessary, Biden replied: "I would shut it down."

The former vice president's remarks came as part of his first joint interview with vice presidential nominee Kamala Harris. The pair accepted their party's nominations during a virtual convention last week. On Monday, Republicans begin their convention to nominate Trump and Vice President Mike Pence for a second term.

Biden and Harris, once primary rivals who sparred on the debate stage, sought during their sit-down with ABC to project a united front on policy issues from race to health care.

Harris, the first Black woman to join a major-party presidential ticket, vouched for Biden, a 77-year-old white man, when asked whether she's privately addressed some of his missteps when discussing race. He declared in May that any Black American having trouble deciding who to support "ain't Black," a comment he walked back the same day and said again Sunday he regretted.

Harris described Biden as possessing "a deep sense of awareness and knowledge about racial disparities, inequities and systematic racism." She added that Biden "actually knows how to say the words 'Black Lives Matter,'" contrary to Trump, who "will never speak those words."

The running mates downplayed their bitter debate encounter last summer, when Harris leveled deeply personal criticism against Biden over his opposition in the 1970s to federally mandated busing to desegregate public schools and for remarks he'd made about having worked amicably alongside racist senators when he first came to Washington.

Harris noted enduring racial wealth gaps in the U.S. and the disproportionate effects of COVID-19 on Black and Hispanic communities. Biden, she said, "is addressing these truths, he speaks these truths."

Biden said, looking back, he understands how Harris, who was among the minority students bused in the 1970s, would criticize him so harshly. But he said she and others may not have known his full record on civil rights.

He said he, as a white man, cannot understand her lived experiences and that she, a 55-year-old daughter of Indian and Jamaican immigrants, can't understand his. But, he said they "have the same value set" and are "on same exact page about what the possibilities are right now."

"I signed on to bills that were about great ideas to fix the problem," Harris told ABC, arguing she and Biden "are completely aligned on ... making sure everyone has health care."

Biden called any differences "tactical" but said, "We both believe that health care is a right, not a privilege."

Pressed about her record as a prosecutor, Harris tacitly acknowledged that some critics see her as part of the same criminal justice system she and Biden want to overhaul amid ongoing protests over the killings of Black Americans by police. Biden repeated that, contrary to Trump's assertion, they do not support defunding police departments around the country.

The interview was Biden's first extended sit-down with national journalists since Trump, who is just three years younger than Biden, mocked his Democratic rival as unable to handle such a venue. Trump has repeatedly suggested Biden is mentally unfit for the presidency. Biden smiled when asked about Trump's characterization and said he remains eager to debate the president. Biden said he has no problem with voters questioning his fitness. "It's a legitimate question to ask" about his and Trump's ages, Biden said. "Watch me."

Biden also laughed when asked about Trump's recent statement that the only way he'd lose was if the election were rigged, and the Democratic challenger dismissed any notions that Trump wouldn't leave the White House voluntarily if he loses.