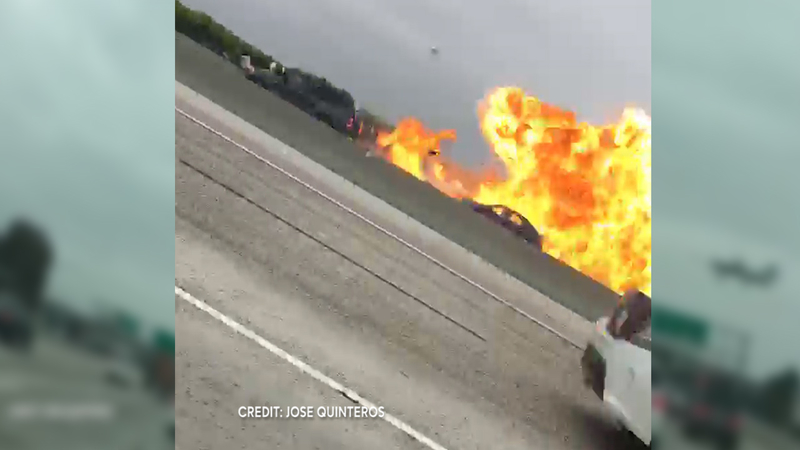 SANTA ANA, California -- Two people were injured after a small airplane crashed on the 405 Freeway near John Wayne Airport in southern California on Friday, officials said.

The plane, described by the airport and FAA as a twin-engine Cessna 310, crashed around 9:30 a.m., Orange County Fire Capt. Larry Kurtz said. The crash occurred on the southbound side of the freeway.

The captain said two people aboard the plane, a man and woman in their 50s and early 60s, suffered traumatic injuries and were transported by helicopter to a hospital. The Orange County Global Medical Center confirmed it was expecting to receive multiple trauma patients. The plane is designed to hold six people, but only two were aboard.

The plane had departed from John Wayne Airport in the morning, but shortly after takeoff, the pilot declared an emergency and was trying to return to the airport when the crash occurred, according to the FAA.


In a recording of the mayday call from LiveATC.net, the pilot can be heard telling the control tower that he was trying to get a little altitude before saying, "I lost my right engine."

MORE: Listen to mayday call made by pilot before plane crash

The plane only clipped one vehicle as it crashed on the freeway, Kurtz said, adding that this was "truly remarkable." No one on the ground was injured, and damage to the clipped vehicle was minimal.

"This could have been extraordinarily bad," Kurtz. "Any time you have a plane that crashes onto a freeway, the potential for great loss of life and great injury always exists."

This is the one car officials say the #plane hit on the 405SB. Uber driver and his passenger are okay. pic.twitter.com/1lCjr3jeIc

Blackstone Hamilton, the Uber driver in that clipped car, told ABC7 that the plane hit the rear end of his pickup truck, which then went out of control.

A driver described the moment a small plane clipped his car before the aircraft crashed on the 405 Freeway near John Wayne Airport on Friday.

ABC7 viewer Jose Quinteros captured the crash on video. He told ABC7 that he was driving on the northbound side of the freeway heading home to Santa Ana when he noticed a plane that appeared out of control, and that's when he started recording.

Witness Cassie Corsaro said immediately after the crash, she saw bystanders rush to the scene.

"Most of the people were getting out of their cars, running to the scene. I know one guy ran back to his car to grab a bottle of water. Someone needed water. They were doing everything that they could to help the people that were hurt," Corsaro said.

OCFA Capt. Larry Kurtz said an off-duty Avalon firefighter near the scene pulled the two victims out of the plane after it crashed.

In an afternoon press conference, Kurtz said an off-duty Avalon firefighter near the scene pulled the two victims out of the plane after it crashed.

The airport, which is located in Santa Ana, posted on Twitter that the plane landed short of the runway. The airfield was temporarily closed to arrivals.

A witness shared video of the fiery aftermath of a plane crash on the 405 Freeway near the John Wayne Airport in Santa Ana on Friday.

The freeway was shut down in both directions at MacArthur due to crash debris. The northbound side was reopened around 10 a.m., the airport confirmed on Twitter.

The plane involved in the 405 Freeway crash is seen on FlightAware.com.

The California Highway Patrol said a total of three vehicles on the southbound lanes and one vehicle on the northbound lanes struck components of the plane following the wreck.

The extent of the injuries were not known. No fatalities were reported.