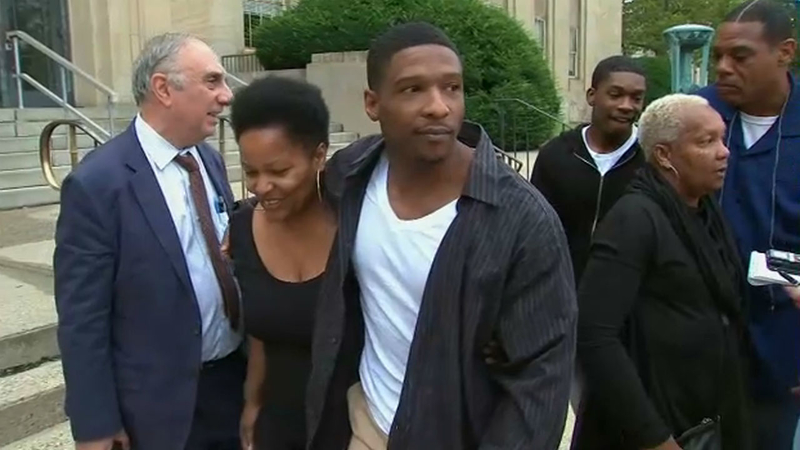 MINEOLA, Long Island (WABC) -- An innocent man wrongly convicted of attempted murder was freed from prison on Thursday after spending a decade behind bars.

Josiah Galloway entered a Nassau County Courtroom in handcuffs while his mother wept tears of joy at the sight of him. Fifteen minutes later he walked out a free man and his attempted murder conviction had been vacated.

"It feels good to finally be vindicated from this," Galloway said.

The attempted murder conviction had kept him in prison for the past 10 years.

"This would come out eventually," he said.

In May of 2008, a cab driver was shot in the face while waiting for a fare at the Hempstead train station. Galloway was convicted on attempted murder, assault and weapons charges and sentenced to 25 years.

His mother said she always knew he was innocent.

"That's all I looked forward to, to see this day come true," Cheryl Johnson said.

Her prayers were answered when she learned the Nassau County District Attorney's office received a tip that another man was the shooter.

"The person that came forward told us that this has been bothering this person for many years. They could no longer remain silent. They knew an innocent person had been in prison," said Sheryl Anania, Chief of the Conviction Integrity Unit.

They identified the shooter, found people he had confessed to and then found him in prison.

"Unfortunately the statute of limitations is only five years for attempted murder. This person can't be prosecuted by us," Anania said.

So now Galloway will hug his younger brother Khalil, enjoy being with family again and begin his new life.

"Spend some time with my family," Galloway said. "That's all that is in the plan right now. Thanks."