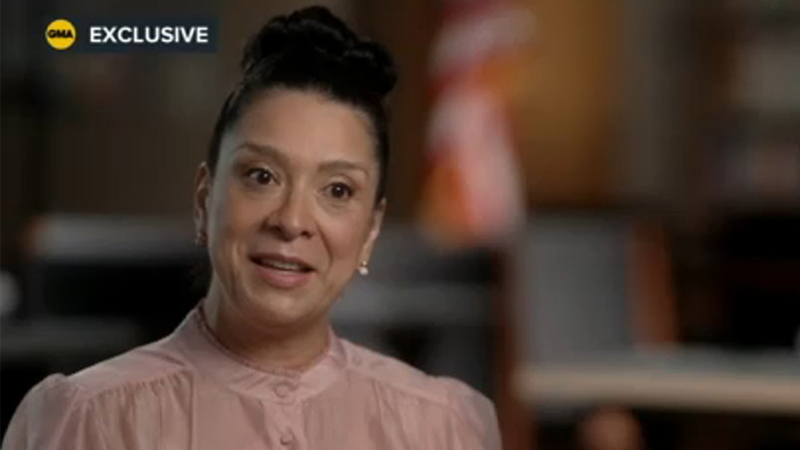 ABC's Robin Roberts sat down with Judge Salas and her husband on "Good Morning America" to talk about their emotional journey this past year and how they leaned on their faith.

"Everything I do from this moment on is for Daniel," Judge Salas said. "He sacrificed his life for his father and me."

It was the ultimate act of heroism. Judge Salas' son Daniel took a fatal bullet after a gunman posing as a delivery driver attempted to assassinate the judge at her home in North Brunswick, New Jersey last summer.

"How has this past year been, the roller-coaster of emotions?" Roberts asked.

"I don't want to sugarcoat, some of the depths of our despair at moments, Mark, thank goodness, is thriving, but we had some scares, and you know, we're traveling this journey together," Salas said.

Through that emotional journey they have been leaning on their faith and each other:

"One of the things I learned about my husband was his resilience," she said. "He had crawled out to the porch to try to get a license plate, that was the first sign this guy was just not going to stop."

"Really, Mark? That was your thought?" Roberts asked.

"It was a lot of adrenaline. I knew Daniel was not going to make it just from being with him. I just could tell. And he was in a state of grace so I was happy. I went over to the other side very briefly. I...I was in the light and I was assured. And I know that he's fine. So when I woke up and I saw Esther, I could tell her that," Mark Anderl said.

Over time, Judge Salas says she found the strength to forgive her son's killer:

"Love is light, and it's so true," Salas said. "You can't walk around with that burden of resentment, hate, it's like an anchor, it holds you down."

"And how did you get to that place?" Roberts asked.

"You know, I think it's my faith, and I realize that in some part it's important to forgive," she said. "It helps you be open to the love that people want to give you, and I think it helps the person that's injured to also move forward, not on, but move forward."

"What is it like that this field, this baseball field is named after him?" Roberts asked.

"It's surreal, it's fantastic," Anderl said.

"Do you feel the love? The support?" Roberts asked.

"All we can say is thank you," Judge Salas said. "We will continue to fight because Daniel expects that from mom and dad."

Judge Salas now fighting for increased protection for her fellow judges through "Daniel's Law," a bill reintroduced to Congress just last week as threats against federal judges continue to rise.

"What we're asking is that we protect our personal information, our home addresses, our social security numbers. This is what the shooter did in my case. He took all that available information, created a dossier, knew where I lived, knew my church, knew my husband's office, knew Daniel's school, knew this school," Judge Salas said. "He even had games that Daniel had played in, and he used that information to target us. And that should be a grim reminder of what will happen if we do not do something to protect our judiciary."

"What do you think it's going to take for it to become federal law?" Roberts asked.

"I think we need to send a message. We are not going to allow the constitutional principles we've lived by to be attacked," she said. "It's not lost on me that this man hated me because I was a woman, but he also hated me because I was Latina. And when you, you attack people for who they are, you're challenging the very principles that we hold near and dear in this country. The principles of equality and justice for all."

"And is it that spirit right there that brought you back to the bench?" Roberts asked.

"Absolutely. Absolutely," Salas said. "This man took the most important thing in my life. He will take nothing else."

Judge Salas embraces each day with renewed purpose. Over the weekend, the community helping to carry the torch by hosting the "Love is Light 5K" to help fund scholarships in Daniel's honor.

"Daniel, I like to say, loved life and everyone in it," she said. "He loved to make his friends laugh. And he loved to make the most out of every moment, and I realized, you know what? Out of the senseless tragedy, his life makes sense. It makes sense."