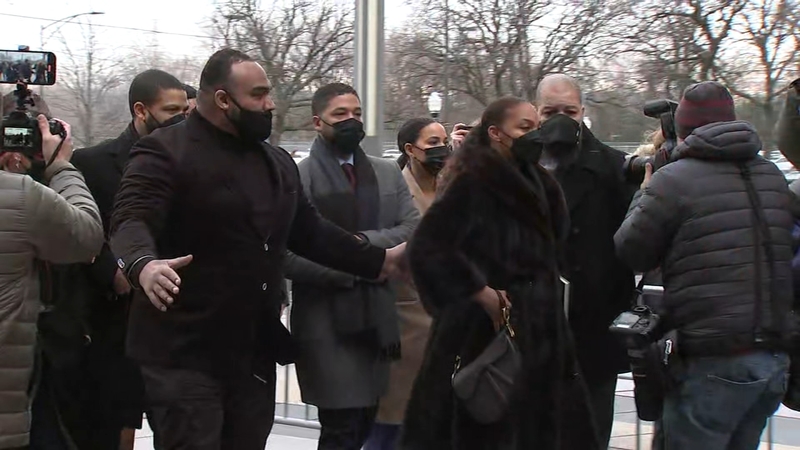 CHICAGO -- After two brothers spent hours telling a jury how Jussie Smollett paid them to carry out a fake racist and anti-gay attack on himself in downtown Chicago, the actor took the stand to testify in his own defense Monday.

The courtroom was at capacity Monday in anticipation of the actor giving his account on the witness stand.

Smollett, who is one of six children in his family, testified about growing up doing commercials as a child actor. He said at 8-years-old, his family moved to Los Angeles where he eventually focused on music.

He also described how as a young adult he would often take the bus to work as a waiter, in retail and also as a clown. Smollett said he would also live in Europe for months at a time while trying to work in clubs as a musician, "and kept on trying."

The former "Empire" actor was then questioned about his time on the show, where he was said to be making $100,000 per episode before he was fired.

He told the jurors that he met Bola Osundairo through a security contact and then they became friends. He testified that they would do drugs and go out together, including to a gay bathhouse.

Before the actor took the stand, his defense team called a security guard to testify first.

Anthony Moore told the jury he was working nights at the Sheraton on Jan. 28, 2019, when he saw two men running. He said one was a white male.

He testified that he could see in the distance a third man bent over or on all fours on the ground. He testified that he told Chicago police officers two or three times what he saw, and when questioned by someone from the Special Prosecutor's Office, he felt pressured "to say something I didn't see."

Jurors also watched surveillance video of the incident, and the executive producer of "Empire" testified about a hate letter against Smollett that caused more security for the actor on and off set.

The reasons why Smollett might want to testify begin with just how bizarre the case is. During the trial that started last Monday, what emerged was the story of a television star who cast two brothers as his attackers, gave them dialogue to recite, and paid for the rope he told them to fashion into a noose and loop around his neck.

As strange as that sounds, it is the only narrative that has come to the jury from the siblings, Abimbola and Olabinjo Osundairo. And some legal experts say the only chance Smollett has of beating charges that he lied to the police is by telling jurors his version of what happened on Jan. 29, 2019.

Terry Ekl, a prominent Chicago-area defense attorney not involved in the case, and other legal experts said jurors are not supposed to read anything into a defendant's decision not to testify but that when they return to the deliberation room they often do just that.

As to the importance of a defendant testifying, legal experts said one need look no further than the recent trial in Kenosha, Wisconsin, where Kyle Rittenhouse was acquitted of all charges after he testified that he fatally shot two men and wounded another because he feared for his own life.

"They won the case by putting him on," said Kathleen Zellner, a Chicago area defense attorney. "The jury believed him."

In Smollett's case, it may be important for him to testify because, as bizarre as the brothers' testimony was, they are the only witnesses to the incident who have testified. And, said Chicago-based defense attorney, Joe Lopez, Smollett's attorneys "haven't been able to impeach these brothers."

Nor have they located a white person that a woman told police she saw carrying a rope in the area earlier that night, leaving the brothers and Smollett as the only three people that the jury can conclude know what happened.

"I think they just want to hear his story and if they don't, the only one they've got is the prosecutions' story," said David Erickson, a former state appellate judge who teaches at Chicago Kent College of Law.

Another reason why Smollett might want to testify: He should be good at it.

"He's an actor. He should be testifying," Lopez said.

Erickson said that when he teaches trial advocacy, he makes it clear from the outset that jurors vote for people they like. Right now, he said, he's sure they like the special prosecutor, Dan Webb. "Dan Webb is Everyman, he seems like a nice guy, a good next-door neighbor. "

In contrast, they don't know Smollett, and have not heard his voice since he introduced himself during jury selection.

But testifying could pose all sorts of problems for Smollett, starting with his need to explain how the brothers knew they would run into him in the dead of a brutally cold night in an unfamiliar neighborhood as he returned from a sandwich shop. Unless he told them he would be there.

Also, if he's convicted, Smollett's words could land him in yet more trouble.

"You can't be penalized (by a judge) for not testifying but if he takes the stand and the judge believes he perjured himself, he can add (jail or prison) time," said Erickson.

At issue is not whether the attack happened, but whether Smollett staged it with the help of two brothers he knew.

Brandon Moore testified he was on the phone with Smollett when the attack happened.

Emergency Room doctor Robert Turelli said Smollett's injuries were serious enough for him to order an X-ray and a CT scan, both revealing no major injury.

The state's two star witnesses in the Jussie Smollett trial both took the stand Thursday. Brothers Bola and Ola Osundairo faced tough questioning from both sides, but especially from defense council trying to discredit their assertion Smollett enlisted them to stage a hate crime attack on him.

Defense attorney Shay Allen asked Osundairo if he sold Smollett drugs and about guns found in Osundairo's home when police searched it. Osundairo said he got drugs for Smollett when the actor asked him to but added, "I'm not a drug dealer, I don't sell."

Allen also questioned the motivation behind Osundairo's interactions with Smollett, suggesting they were dating, that Smollett wanted Osundairo to get him supplements that are illegal in the U.S., and that the aspiring actor - who worked as a stand-in on "Empire" - wanted a high-paid job as Smollett's security.

Allen also suggested Smollett wasn't involved in plotting the alleged attack, and that the brothers acted on their own.

Smollett's legal team needed to cast doubt on Osundairo's damaging testimony from Wednesday, but it wasn't an easy task.

The defense contended the siblings had a history of making anti-gay remarks on social media and on the "Empire" set, and targeted Smollett, who's openly gay.

Osundairo stuck with his story Thursday, while denying a sexual relationship with Smollett and that he asked the actor to hire him. And much of what Osundairo told jurors about the Jan. 29, 2019, event appears to be corroborated by video and other evidence.

Under redirect questioning, Osundairo said he and his brother agreed because he felt indebted to Smollett for helping him with his acting career.

Smollett, 39, is charged with six counts of felony disorderly conduct for making what prosecutors say was a false police report about the alleged attack - one count for each time he gave a report - to three different officers. The class 4 felony carries a prison sentence of up to three years, but experts have said if Smollett is convicted he likely would be placed on probation and ordered to perform community service.

A defense attorney told jurors during openings that Smollett was a "real victim" and that the brothers' accounts are unreliable.

Defense attorney Nenye Uche has said the brothers attacked Smollett, who is Black and gay, "because of who he is" and has suggested that the brothers were homophobic.

The trial is expected to wrap up this week.

Smollett has pleaded not guilty.

Associated Press contributed to this report.