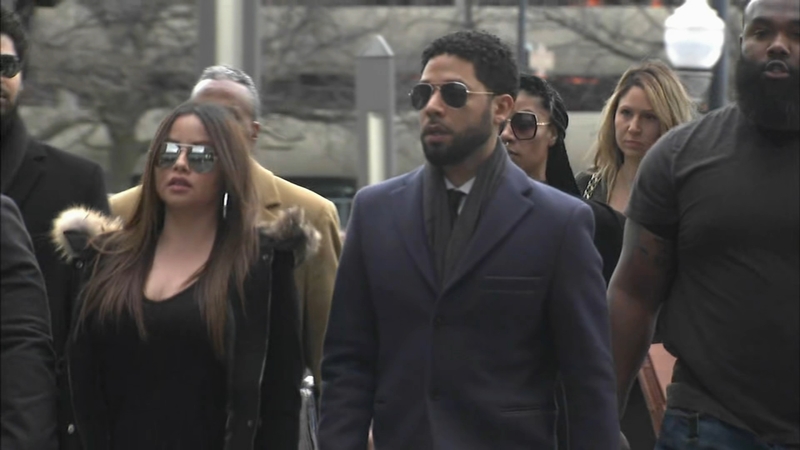 Lightfoot: Smollett case 'Doesn't rank as a matter of any importance to me'

CHICAGO -- The city of Chicago has filed a lawsuit against actor Jussie Smollett for the cost of the overtime Chicago police spent investigating an attack they say Smollett staged.

The City of Chicago's Law Department filed the suit after Smollett failed to meet a city-demanded deadline to pay more than $130,000 into that allegedly staged attack.

City attorneys write in the suit, "Defendant knew his attackers and orchestrated the purported attack himself. Later, when police confronted him with evidence, he still refused to disclose his involvement."

The lawsuit was filed in the Circuit Court of Cook County and seeks money "included, but not limited to $130,105.15." The suit also asks Smollett be found liable to the city for $1,000 "for each false statement he made to the city, in addition to three times the amount of the damages that the city sustained, as well as litigation and collection costs, and attorneys' fees."

Soffer said through the process called discovery the public could see a lot.

"Lawyers for the city will get evidence that exists," Soffer explained. "They'll get tape recordings. They'll get video surveillance, they'll get phone records and they'll take depositions. And transcripts will be made of those depositions. And then if it goes through to a trial we'll see all of this come out in the open. You'll see Jussie Smollett take the stand and testify."

The city previously said it intended to file the suit, and Mayor Rahm Emanuel offered his suggestion for how Smollett should pay the city back.

"Given that he doesn't feel any sense of contrition and remorse, my recommendation is that when he writes the check, in the memo section, he can put the words, 'I'm accountable for the hoax,'" Mayor Rahm Emanuel said two weeks ago.

ABC7 spoke with Mayor-elect Lori Lightfoot about the case. Lightfoot wouldn't say exactly how she would handle the city's involvement with the Smollett, case moving forward.

"We've got a lot of things on our plate, a lot of pressing issues that are truly affecting people's lives," Lightfoot said. "This doesn't rank as a matter of any importance to me."

Lightfoot was at McCormick Place Friday morning to cut the ribbon on the start of the Black Women's Expo. She would not commit to what she will do once she takes office in May.

"I'm not gonna comment about any pending litigation," Lightfoot said. "Obviously, this is a decision that was made by the current mayor Rahm Emanuel. If this issue is still pending, we'll evaluate it at that time after I'm sworn in."

Smollett had been charged with 16 counts of felony disorderly conduct for allegedly lying to police about a January attack in Chicago's Streeterville neighborhood, which police say Smollett staged on himself because he was unhappy with his "Empire" salary. All charges against him were dropped in exchange for community service and forfeiture of his $10,000 bond payment.

A member of Smollett's team responded to the suit, saying simply, "No comment."