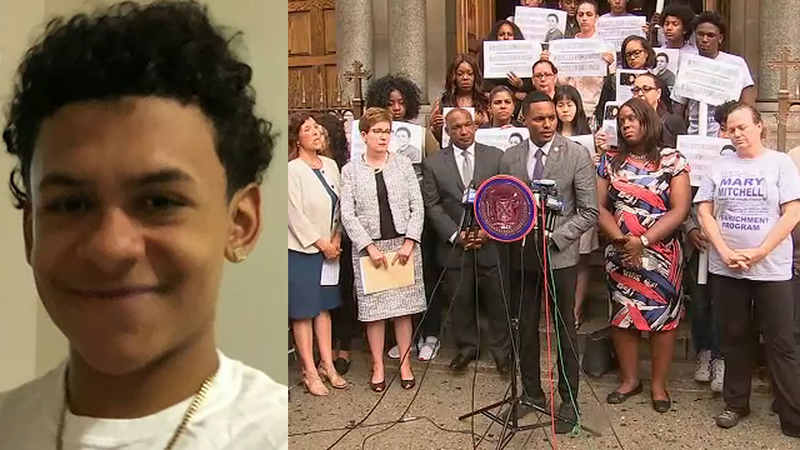 LOWER MANHATTAN, New York City (WABC) -- Lawmakers and residents in the Bronx are turning their grief into action as they mourn the death of Lesandro Guzman-Feliz, who was brutally murdered by alleged gang members who attacked him with machetes outside a bodega.

Thousands of mourners gathered Wednesday at funeral services for the 15-year-old affectionately known as Junior. And on Thursday, they took action in hopes of preventing another such tragedy in the future.

The community is now fighting back against street violence, and at a rally on the steps of City Hall, Councilman Ritchie Torres announced he is pushing for more funding to be aimed at wiping out gangs.

"The legacy that Junior leaves behind, captured in the words 'Justice for Junior,' has become a national rallying cry against...violence," Torres said. "And the challenge for us is to harness the power of his legacy to set our communities free from the disease."

Eight men have been arrested in Guzman-Feliz's death, with charges including first-degree murder and gang assault.

The attack happened outside a deli on East 183rd Street and Bathgate Avenue in the Tremont section just after 11:30 p.m. last Wednesday, in what authorities believe was a case of mistaken identity that left the entire community outraged.

"This investigation is not over," NYPD Chief of Detectives Dermot Shea said. "The brutal nature of this crime, we will leave literally no stone unturned."

Authorities say the men are all members of the Trinitarios gang, which is also believed to be involved in the stabbing of a 14-year-old on the Bronx River Parkway last week.

The NYPD is now cracking down on that gang..

"Pick up a gun, pick up a machete, rob an elderly victim walking home from the train is a one-way ticket to prison," Shea said.