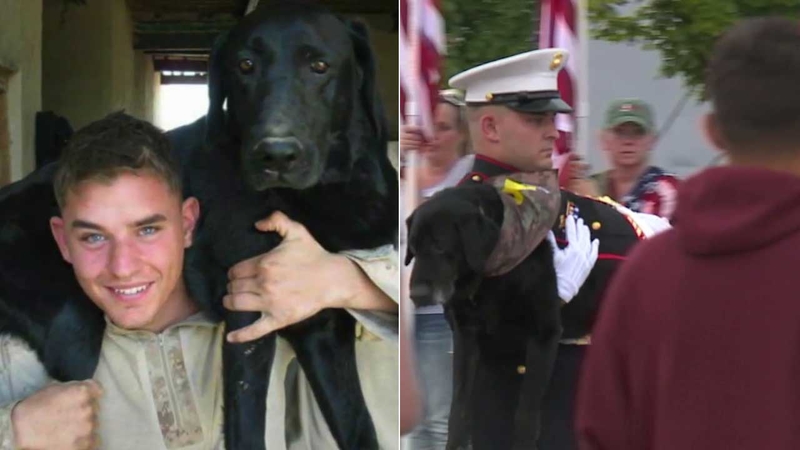 MUSKEGON, Michigan -- Hundreds of people gathered in Michigan to say a goodbye to a cancer-stricken dog who served three tours in Afghanistan with the U.S. Marines.

Cena, a 10-year-old old black lab, received a hero's farewell Wednesday before being euthanized at the USS LST 393, a museum ship in Muskegon, and carried off in a flag-draped coffin.

Cena, who was recently diagnosed with terminal bone cancer, was a bomb-sniffer for the Marines until his retirement in 2014.

The hero's sendoff was organized by his owner, Lance Cpl. Jeff DeYoung, who was paired with Cena in 2009 and 2010 while on a combat tour in Afghanistan. He adopted Cena in 2014.

Cena then became DeYoung's service dog to help him with his post-traumatic stress disorder.

DeYoung said he's carried Cena across rivers and thrown his body over him while under heavy fire from the Taliban. He said Cena kept DeYoung's body warm during cold desert nights, and comforted him when he lost seven friends in three weeks.

"Every Marine has to go out in a set of dress blues. That's just the way we are," DeYoung said. "He's got his decorations, he's dressed to the nines, he got a fresh grooming service today and we're ready to make peace with what we have to do."

Before saying goodbye, the two went on one last adventure together. The pair took off to ride in a topless Jeep, wearing custom dress blues. The vehicle was decorated and named "Cancer Response Team."

DeYoung and his best friend then took their final walk as fellow service members and public safety officials gave one final three-volley salute with taps playing in the background for Cena, who was wearing a decorated blue Marine vest.

"Any dog that served overseas deserves exactly what I've done for Cena, if not more," DeYoung said.