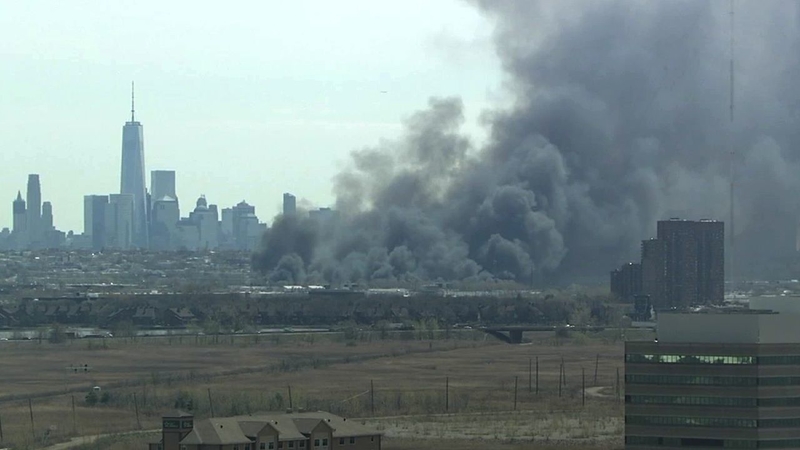 The fires started in Kearny and Secaucus sometime in the noon hour, and the smoke could be seen for miles.

Police say the fires were contained to a specific area and were under control as firefighters worked to extinguish hot spots. It's estimated that 150 acres burned in the fire.

The fire raged for nearly two hours, while drivers on the New Jersey Turnpike gaped as the flames roared across the Meadowlands brush. Firefighters struggled to reach the fire in the face of stiff winds that fanned the blaze.

Secaucus Mayor Michael Gonnelli said there were not injuries, but putting out the fire was a challenge.

New Jersey Transit had diverted Midtown Direct trains to Hoboken, and Amtrak suspended Northeast Corridor service between New York and Newark. Rail service resumed, but customers were advised to expect residual delays of up to 30 minutes.

There was no damage to the tracks.

Eyewitness News viewers sent of photos of the smoke, as viewed from different parts of the region, including New York City:

@ABC7NY large fire across the Hudson in Jersey!!! pic.twitter.com/KsAWD4VrHU

This photo shows the intense flames from the fire:

Thanks to viewer Silvana Nana for sharing this photo of the brush fire in Kearny https://t.co/IexvsI1urz pic.twitter.com/aQOw9gY4xM