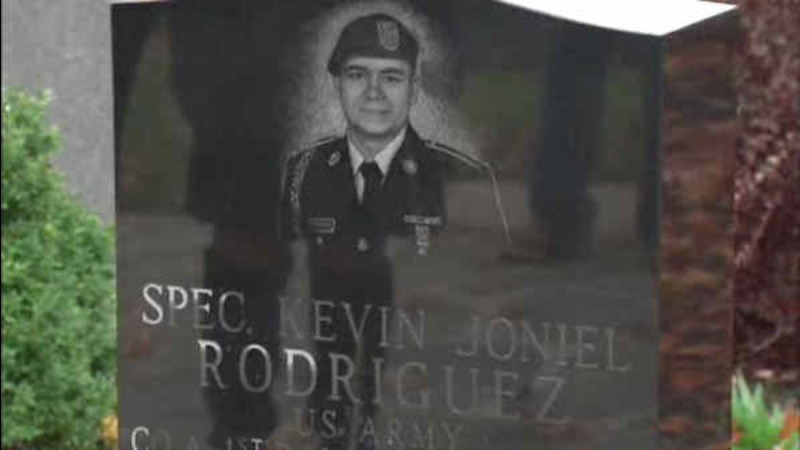 PATERSON (WABC) -- On this Veterans Day, there was grief and sorrow on Paterson's Hill of Heroes.

Tears flowed from the family of 22-year-old Kevin Rodriguez as city leaders unveiled a memorial monument to the Army specialist and native son who made the ultimate sacrifice just last month.

"That means a lot to me, to my family," mom Joan Rodriguez said. "He really deserved it."

"A true soldier who in just two years had earned more than a half-dozen medals and commendations, having served in Afghanistan," Sen. Bob Menendez said.

Rodriguez was an infantryman with Company A, 1st Battalion, 187th Infantry Regiment, 3rd Brigade Combat Team, known as "Rakkasans." He enlisted two years ago and completed a nine-month deployment in June.

But it wasn't on the battlefields of Afghanistan where Rodriguez died. He was shot and killed during a training exercise at Fort Campbell in Kentucky.

Family members say the Army has yet to reveal the specific details of his death.

"To the Rodriguez family, I made a commitment to you, and I will keep that commitment in terms of your beloved son," Rep. Bill Pascrell said. "And we will know exactly what happened and the circumstances."
Related topics:
societypatersonveterans dayveteransoldier killed
Copyright © 2022 WABC-TV. All Rights Reserved.
TOP STORIES
AccuWeather Alert: Messy morning
Deadly Bronx house explosion caught on camera
Supreme Court allows Jan. 6 committee to get Trump documents
School Closings
Find out which schools are closed in your district.
Watch NatGeo documentary 'The First Wave' free for 48 hours
Cardi B offers to pay for funerals of all 17 Bronx fire victims
Starbucks no longer requiring US workers to be vaccinated
Show More
Local twins finalists for one of the top science prizes in the nation
Times Square subway shove suspect ordered held without bail
Third teen sentenced in murder of Barnard student Tessa Majors
Rescue captured on bodycam video after 3 break through thin ice
French actor Gaspard Ulliel dies after ski accident
More TOP STORIES News