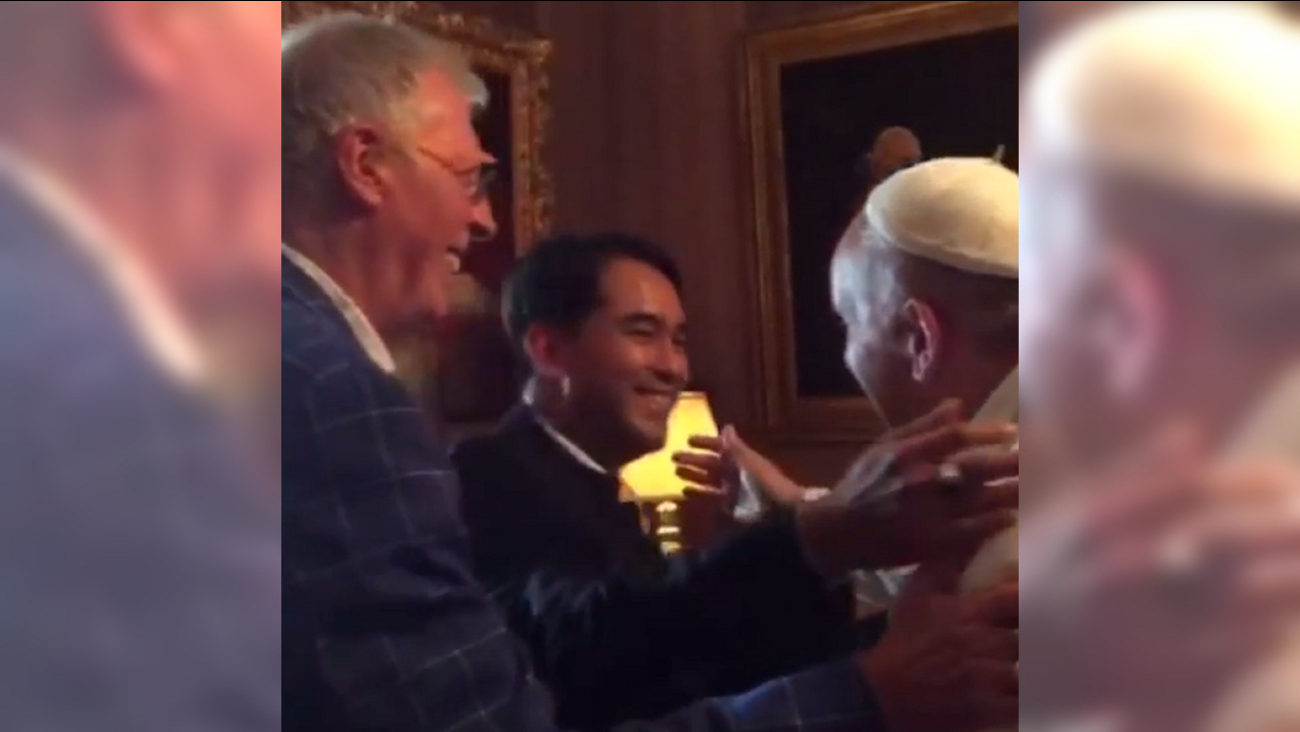 The Vatican revealed that the "only real audience" Francis had in Washington was with a former student and his family, who later identified himself as Yayo Grassi. (@iamiwanbagus/Instagram)

VATICAN CITY -- The Vatican on Friday distanced Pope Francis from Kim Davis, the Kentucky clerk at the center of the U.S. gay marriage debate, saying she was one of dozens of people the pope greeted as he left Washington and that their encounter "should not be considered a form of support of her position."

And in a new twist, the Vatican revealed that the "only real audience" Francis had in Washington was with a former student and his family, who later identified himself as Yayo Grassi, an openly gay Argentine who met the pope with his longtime partner and some friends.

The revelations turned the table on the narrative of Davis' encounter, making clear that Francis wanted another meeting to come to light: that of an old student and his "family," who happens to be gay.

The Vatican spokesman, the Rev. Federico Lombardi, said Francis met with "several dozen" people at the Vatican's embassy in Washington just before leaving for New York. Lombardi said such meetings are normal on any Vatican trip and are due to the pope's "kindness and availability."

And Lombardi said Davis' "brief" meeting that afternoon was by no means a papal endorsement of her cause.

"The pope did not enter into the details of the situation of Mrs. Davis and his meeting with her should not be considered a form of support of her position in all of its particular and complex aspects," Lombardi said.

"The only real audience granted by the pope at the nunciature was with one of his former students and his family," Lombardi added.

Lombardi didn't reveal who the student was, but the man subsequently came forward: In a video posted online, Grassi is shown entering the embassy, embracing his former teacher and introducing Francis to his partner, whom Francis recognized from a previous meeting, and a few friends from Asia.

A Vatican assistant spokesman, the Rev. Thomas Rosica, confirmed that the former student was indeed Grassi.

An audience differs from a meeting in that it is a planned, somewhat formal affair. Popes have audiences with heads of state. They have meetings and greeting sessions with benefactors or Catholic VIPs. So the fact that Lombardi described Grassi's encounter as the only "real audience" in Washington made clear that Francis wanted to emphasize that encounter over Davis' "brief meeting" with several dozen other people invited to the embassy at the same time.

A judge ultimately freed Davis on the condition she doesn't interfere with her deputies issuing the licenses. When Davis returned to work, she replaced the licenses with new ones saying they were issued "pursuant to federal court order."

Davis said earlier this week that she and her husband met briefly with the pope at the Vatican's nunciature in Washington and that he thanked her for her courage and encouraged her to "stay strong."

"Just knowing that the pope is on track with what we're doing and agreeing, you know, it kind of validates everything," she told ABC.

The Vatican statement made clear the pope intended no such validation.

However, Davis' lawyer, Mat Staver, told The Associated Press that the Vatican initiated the meeting as an affirmation of her right to be conscientious objector.

"We wouldn't expect the pope to weigh in on the particulars of any case," Staver said Friday. "Rather, the meeting was a pastoral meeting to encourage Kim Davis in which Pope Francis thanked her for her courage and told her to 'Stay strong,'" Staver said in a statement. "His words and actions support the universal human right to conscientious objection."

He said an unnamed Vatican official initiated the meeting on Sept. 14, the day Davis returned to work after being jailed, saying the pope wanted to meet her. He said Vatican security picked up her and her husband from their hotel and told her to change her hairdo so she wouldn't be recognized since the Vatican wanted the meeting kept secret.

Staver disputed a Vatican spokesman's claims that the pope only met Davis in a "farewell lineup" or receiving line. He said the couple was in a separate room with Francis and Vatican security and personnel and that no member of the general public was present, to keep the meeting secret. He said the Vatican official who arranged the meeting insisted that it not be made public until after Francis had left the U.S., and gave him the "green light" to make it public after Francis was back in Rome.

News of the meeting sent shockwaves through the U.S. church, with Davis' supporters saying it showed the pope backed her cause and opponents questioning whether the pope had been duped into meeting with her.

Initially the Vatican only reluctantly confirmed the meeting but offered no comment.

On Friday, Lombardi met with Francis and issued a fuller statement to "contribute to an objective understanding of what transpired." Francis has made clear he dislikes being used for political ends, and Lombardi's statement appeared intended to make clear that the encounter should in no way be exploited.

Lombardi declined to say who invited Davis into the nunciature or what the pope knew of the case ahead of time. Such encounters are arranged by the Vatican ambassador and his staff, not the pope's delegation or the U.S. bishops' conference.

The Vatican nuncio in Washington is Archbishop Carlo Maria Vigano, an Italian best known for his role in the Vatileaks scandal, which helped bring about Pope Benedict XVI's resignation: The scandal began in 2012 when an Italian journalist broadcast letters from Vigano, then the No. 2 Vatican administrator, to Benedict in which he begged not to be transferred for having exposed alleged corruption that cost the Holy See millions of euros. Vigano was eventually transferred to Washington to become ambassador.

He has since strongly taken up the religious liberty charge championed by U.S. bishops, suggesting that he might well have supported Davis in her battle over gay marriage: In a 2012 speech to the University of Notre Dame, Vigano denounced threats to religious liberty in the U.S. and abroad, citing a public school curriculum presenting same-sex relations as "natural and wholesome."

Rosica, Lombardi's assistant, said he believed the pope would have been given a list of the several dozen people who were invited to farewell as he left Washington, but he was unaware of the details of Davis' case or any possible implications of the meeting. He hypothesized that the reception amounted to a receiving line-type event, with people in various rooms on the first floor of the embassy to greet the pope and receive a rosary from him.

"I don't think he knew the details, the full biographies of each person, except for the names of the people there," Rosica said.

"I don't think it's a matter of being tricked as of being fully aware of the situation and its complexities," he said. "I don't think anyone was willfully trying to trick the pope, and at the same time nor was the pope briefed properly on who was he meeting. He wasn't properly briefed on the person or the impact of such a visit."

He said Davis' supporters had "overblown" the encounter.

As he left the country, Francis told reporters who inquired that he did not know specific cases in detail, but he defended conscientious objection as a human right.