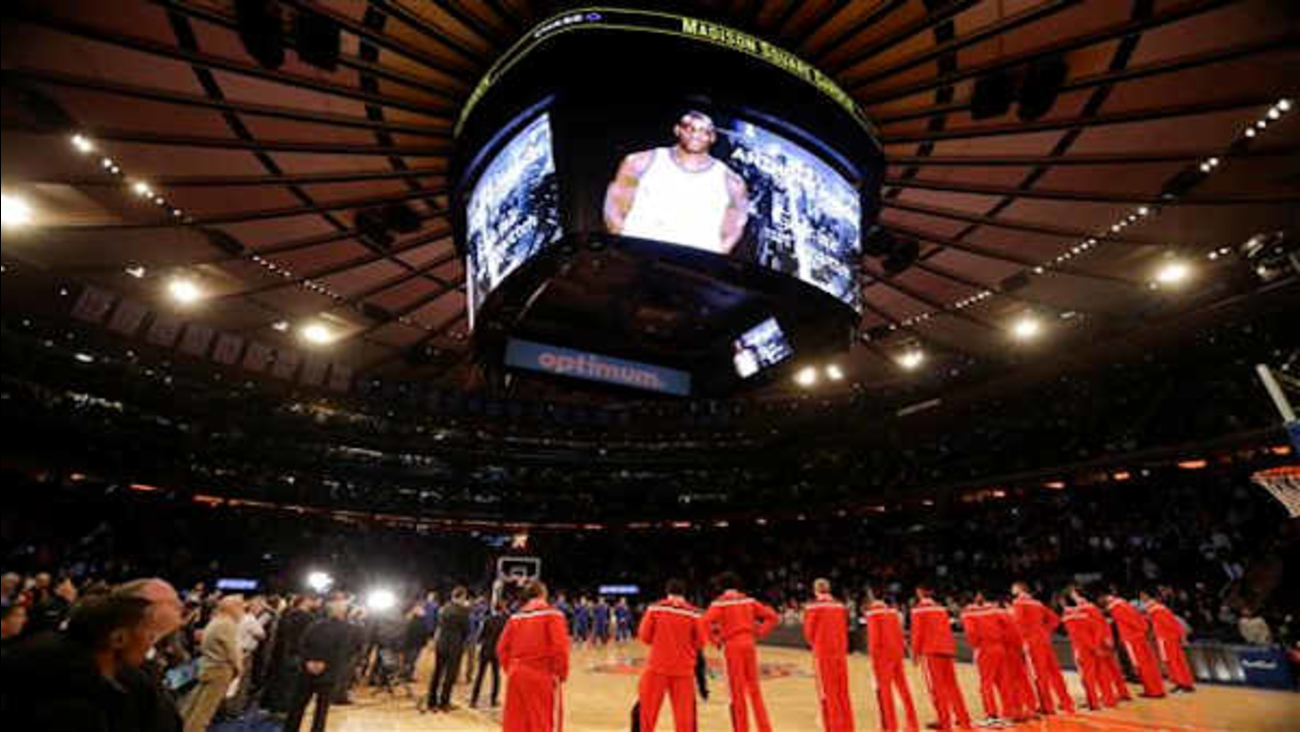 NEW YORK -- Tim Hardaway Jr. scored 22 points, Langston Galloway made a clinching 3-pointer and the New York Knicks ended a sad Saturday for the franchise with a 103-98 victory over Toronto, the Raptors' season-high fifth straight loss.

After beginning the night with a moment of silence for former Knicks forward Anthony Mason, who died Saturday at 48, the team finished it by celebrating its second straight victory.

Former Raptors center Andrea Bargnani scored 19 points and newcomer Alexei Shved had 15 for the Knicks. Lou Amundson scored eight of his nine in the fourth quarter, but the Raptors made a late run after he missed a dunk, cutting a 13-point deficit to two before Galloway's 3-pointer made it 103-98 with 13 seconds to go.

Lou Williams scored 22 points for the Raptors, who fell into a tie with Chicago for second place in the Eastern Conference and are just a half-game ahead of Cleveland for fourth.

Toronto coach Dwane Casey gave slumping All-Star Kyle Lowry a night off to rest and without him the Raptors couldn't find a way to get out of what Casey called the team's "malaise."

Leading by one early in the fourth quarter, the Knicks scored 10 straight points for a 90-79 lead on Amundson's dunk. Jonas Valanciunas scored for the Raptors, but Shane Larkin and Amundson had consecutive baskets for a 94-81 advantage, and Toronto's late run fell short.

Mason was a rugged defender who helped the Knicks reach the 1994 NBA Finals. He was the league's Sixth Man of the Year the following season, and remained popular with fans and teammates long after he was traded away in 1996.

The Knicks honored him with a video tribute during a first-quarter timeout. Coach Derek Fisher recalled Mason as a "gritty" player who was always "determined to get the outcome that he sought."

The current Knicks played the same way, following Friday's double-overtime victory at Detroit with a second straight win after dropping eight in a row.

The point guard is shooting under 30 percent in five games since the break and Casey said before the game he would try to find a spot to get him some rest.

A night after going 1 for 19 in the first quarter, the Raptors made six baskets in the opening period - only because DeMar DeRozan botched what should have been a seventh. He was alone on a fast break and tried what appeared would be a 360-degree dunk, but messed something up after takeoff and the ball rolled off the rim.

Raptors: Toronto finished 4-7 in February. The Raptors had been .500 or better for a franchise-best eight straight months. ... The Raptors fell to 9-2 against the Atlantic Division. ... Valanciunas scored 16 but fouled out with 3:11 left.

Knicks: New York was also without its starting point guard. Jose Calderon, a former Raptor, sat on the bench in a walking boot after an MRI of his left Achilles confirmed a strain. Fisher said doctors hope to have a better idea next week when Calderon could return.