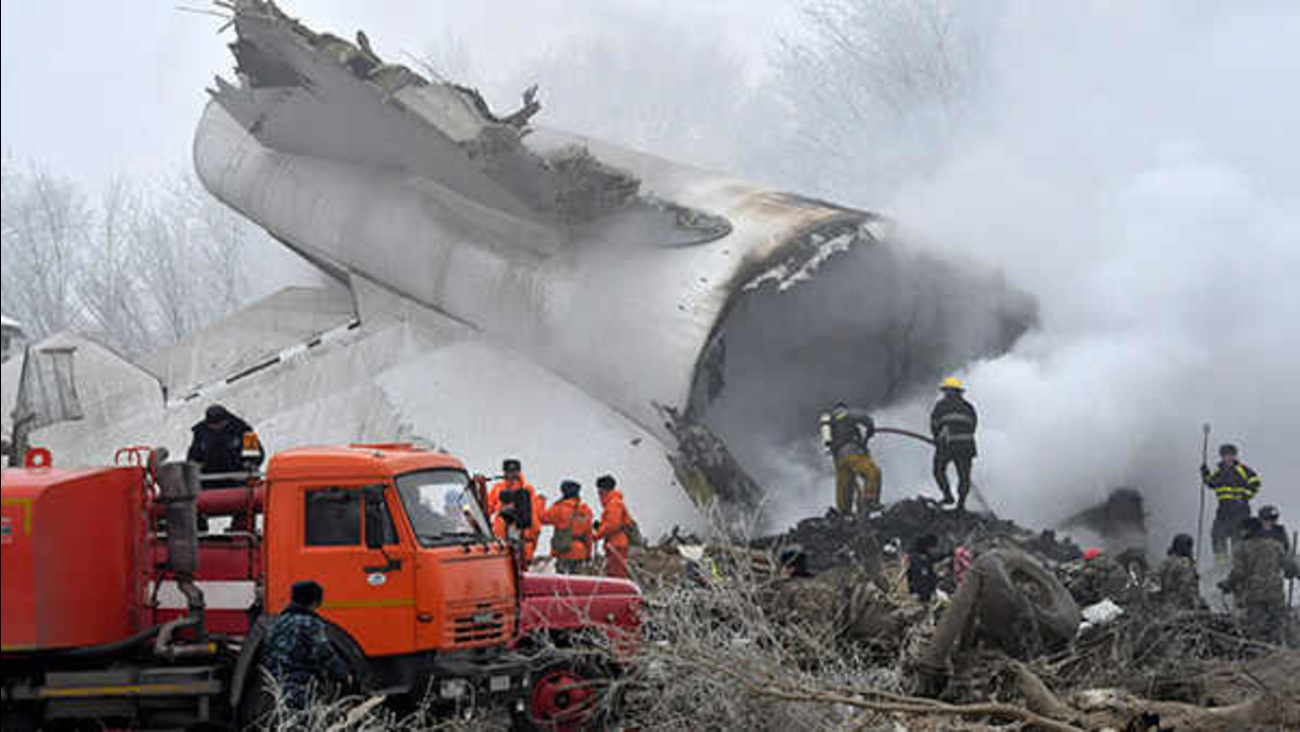 AP
BISHKEK, Kyrgyzstan -- A Turkish cargo plane crashed Monday in a residential area just outside the main airport in Kyrgyzstan, destroying half of a village and killing at least 37 people in the plane and on the ground, the Emergency Situations Ministry said.

The Boeing 747 crashed at 7:40 a.m. local time while approaching Manas airport, south of the capital, Bishkek, in this Central Asian nation.

Footage from the scene showed the plane's nose stuck inside a brick house and large chunks of debris scattered around. A dozen body bags were laid out in the yard of one home. A car parked nearby was mangled in the crash, and a refrigerator lay open.

The bodies of 15 victims, including five children, all of them Kyrgyz citizens, had been identified by Monday evening, the Kyrgyz government said on its website.

Another 15 people, including six children, were hospitalized in the disaster, according to the health ministry.

Kyrgyz Emergency Situations Minister Kubatbek Boronov said 23 out of the 43 houses in the village had been destroyed. Several dozen homes were near the fence surrounding the runway.

The plane, which had departed from Hong Kong, belonged to the Istanbul-based cargo company ACT Airlines, which said the dead included the plane's four Turkish crew members: two pilots, a freight expert and a flight technician.

The cause of the crash was not immediately clear. Emergency Situations Minister Boronov told reporters that it was foggy at Manas when the plane came down but weather conditions were not critical.

One of the plane's two flight recorders was recovered at the scene, according to the Kyrgyz prime minister's office.

"I woke up because of a bright red light outside," resident Baktygul Kurbatova, who was slightly injured, told local television. "I couldn't understand what was happening. It turns out the ceiling and the walls were crashing on us. I was so scared but I managed to cover my son's face with my hands so debris would not fall on him."

The Manas airport has been considerably expanded since the United States began to operate a military installation there, using it primarily for its military operations in Afghanistan. The U.S. handed the base over to the Kyrgyz military in 2014.

ACT Airlines said on Monday that the crash wasn't the result of "technical reasons or factors linked to the freight" on the plane. It did not specify the plane's cargo.

It said the plane's records book had no record of any technical faults and said that the plane had not encountered any mishaps during its journey or as it proceeded to land at Bishkek.

Turkish President Recep Tayyip Erdogan called Kyrgyz President Almazbek Atambayev on Monday to express his condolences and convey his sadness at the loss of lives in the disaster.