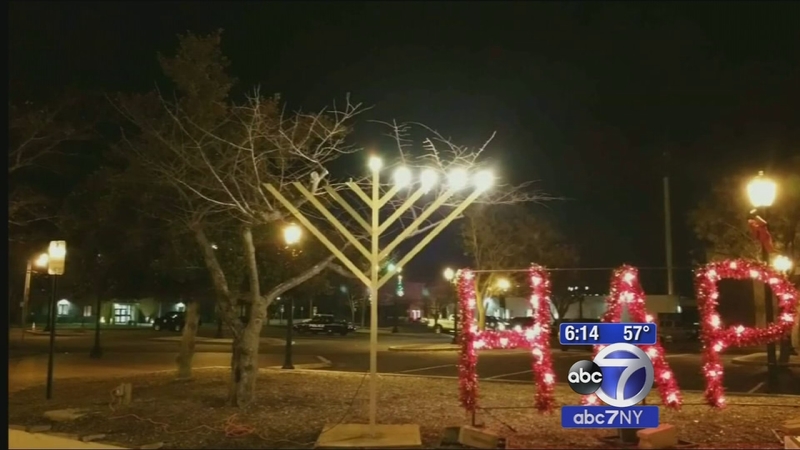 LAKEWOOD, N.J. -- Some residents of a Jewish enclave in New Jersey are upset that officials removed a menorah from the town square and kept the Christmas tree.

Lakewood has displayed a decorated tree and small menorah for decades.

Mayor Albert Akerman told the Asbury Park Press on Wednesday that this year resident Vivian Knight sought to add a nativity scene to the holiday display in the Town Square and that she threatened to sue if the request wasn't approved.

"She wanted to make the distinction that the menorah is a religious symbol and the tree is not," Akerman said.

Knight could not be reached for comment on Wednesday.

Township Attorney Steven Secare reviewed the matter and recommended removing the menorah, as well as one displayed in the town hall, until he could look into an alternative display.

"Why cause litigation when it's costly and time-consuming for everybody?" Secare said Wednesday. "The easiest thing to do was take it down for a year."

The tree remains up because it is not considered a religious symbol under the law.

A Jewish businessman who owns a toy store and frozen yogurt shop in the township, however, said the decision leaves the township promoting Christianity. It makes no sense that a menorah is a problem in Lakewood "of all places," Harold Herskowitz said.

"The way it was set up in Town Square was fine. The fact that we're this Jewish town and have this massive Christmas tree and there's this little teeny menorah is a little weird, but it's fine. I was never going to say a word."

Now, Herskowitz said the community will call for an even bigger menorah next year.